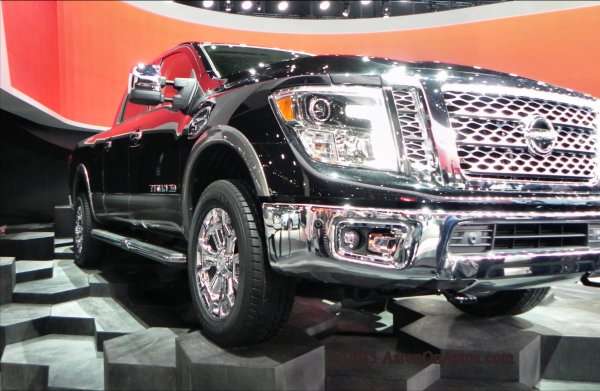 The question most-often heard at the North American International Auto Show on the Titan XD's debut was "who will buy this?"
Advertisement

The chief question heard from "truck guys" at the North American Auto Show after the 2016 Nissan Titan XD diesel unveiled was "who is this truck for?" Answering this question requires some background in the full-size truck market, an understanding of Nissan's history and current position in that market, and into the powerplant chosen for the Titan XD.

The Nissan Titan XD is a heavy-duty half-ton truck. That's a concept that has been kicked around more than once in the industry. The basic idea has been a truck designed to fit between the half-ton, designed for moving and hauling light loads while offering a better highway presence and daily comfort level than a heavier truck can allow, and the more robust and capable, but less comfortable, heavy-duty. Chiefly, an HD truck has a bigger powertrain and far higher towing capcity than does a light-duty truck. The HD also has a heavier chassis and payload capacity, which is what technically defines it as HD. The concept of an HD half-ton is to offer the former without the latter, which gives more capability without sacrificing comfort.

Turning to Nissan, we see a newcomer to the full-sized pickup market who faces several hard, uphill battles to break in. Truck buyers are often downright ornery about their brand loyalty and purchase justifications. They are also generally conservative about purchase decisions. In short, your average truck owner is likely to be as adamant about a Ram, Ford, Chevrolet, or (now) Toyota as they are about football, hockey, baseball, or basketball teams. They are also reluctant to change and leery of things that are new, preferring the familiar. These are the obstacles to be overcome when first entering the full-sized pickup truck market.

Nissan has only been a part of this market for about a decade with their first-generation offering. In that decade, the compay has eked out about one percent in market share. The Titan in 2014, for example, was outsold by Nissan's own LEAF electric car; outsold by more than double, in fact. Having that perspective on the Titan is a key step towards understanding the reasoning behind the Titan XD.

At the unveiling in the Detroit auto show, Nissan CEO Carlos Ghosn was frank about that perspective, noting that the inaugural generation of the Titan held just one percent of the market while openly declaring that the target goals for the next-generation Titan, flaghshipped by the Titan XD diesel, is to roughly quadruple share to 4-5 percent in a couple of years. On its face, this sounds aggressive, but that is, at current, merely tapping a portion of the expected market's growth during that same period by raising Titan sales figures by a couple of thousannd more units per month.

The market, Nissan believes, is ripe for a half-ton heavy duty and that will be the window by which the company gains that larger toe-hold into the full-sized market. They're specifically targeting those who need towing capacity beyond the comfort level of a standard half-ton but do not need the heavy hauling capability of a three-quarter ton truck. Bearing testimony to this target is the prominent fitment for a gooseneck ball and the lack of visible provision for a fifth-wheel trailer coupling. A gooseneck trailer is usually "flat-footed," meaning it's self-contained in terms of weight distribution and so puts little weight on the truck's rear suspension. A fifth-wheel is not, usually putting a portion of its weight forward onto the truck once the "landing gear" is raised.

The Titan XD offers over 12,000 pounds of towing capacity and only about 2,000 pounds of payload. For a small, but not insignificant submarket, this is a perfect match. That is who Nissan is aiming for with the 2016 Titan XD. It’s a perfect match and follows on what others before have done to break into the full-sized pickup truck market: find a small, but sizable key buyer group that isn’t being targeted and supply them.

Huh-what? wrote on January 16, 2015 - 2:10pm Permalink
The tow rating seems low for the hardware and Nissan's need to break into the market. This thing has a commercial designed diesel (Cummins also sells engine for use in heavier vehicles), 550 lb/ft and a 13" ring gear and it's only rated to tow 12,000? With a gooseneck hitch that sounds like 15,000 worth of pull. Nissan needs to do something to get attention, and the 12K rating doesn't do it. Are they trying to stay under some DOT weight class?
Aaron Turpen wrote on January 17, 2015 - 12:31pm Permalink
HALF TON TRUCK To make the tow rating higher, the truck would have to be a 3/4.

Tesla Contemplates A New Strategy for China Retail even As Sales Boom
Jay Leno on Elon Musk & EVs: “I Think He Should Get ... Credit"
END_OF_DOCUMENT_TOKEN_TO_BE_REPLACED