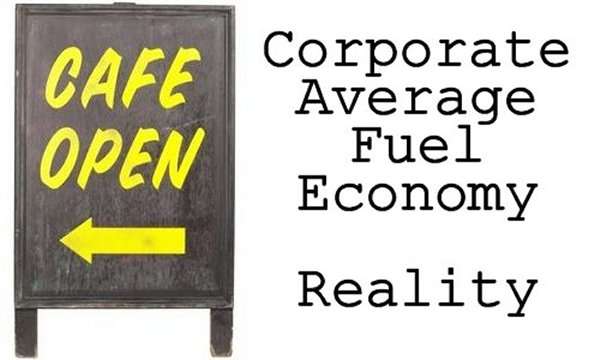 Where Are Automakers On the Looming 2016 CAFE Efficiency Requirements?

2016 is a major step on the ladder of new CAFE requirements by the federal government. Which automakers, at this point, are making the grade?
Advertisement

Back in 2012, the federal government, via the National Highway Traffic Safety Administration (NHTSA), updated corporate average fuel economy (CAFE) standards. At the time, the much-ballyhooed (and since debunked) standard was "54.5 miles per gallon." Political arguments about whether or not CAFE requirements actually do anything worthwhile aside, let's look at how manufacturers are doing in making the first level of the new standards tier: the 2016 requirements.

CAFE is not MPG.. per se
To begin with, it should be understood that the standards and MPG numbers required for CAFE compliance are not the same numbers you see on your window sticker when you purchase a car. The sticker numbers are administered by the Environmental Protection Agency (EPA), which has a different (more real-world) testing method for calculating MPG than does the NHTSA.

The difference between the rating from the NHTSA versus the EPA can be several miles per gallon, usually favoring the NHTSA number. So a CAFE requirement of 50 mpg would not reflect a 50 mpg rating on the window sticker at the car lot – the number there would more likely be in the low 40s instead.

What you'll note is that despite the current EPA report showing the average fuel economy for 2013 model year vehicles at 24.1 mpg, this is actually enough for that average car to achieve 2016 requirements.

2016 Requirements
Turning to 2016 requirements, the basic CAFE requirement is an average of 35.5 mpg. This number, however, is not the sticker or even the NHTSA test MPG, but is instead calculated in a far more complex manner where some technologies boost the MPG (even if they don't, physically, do so) and with various classes of vehicle have different targets.

Some technologies, such as certain coolant types for air conditioning, start-stop engine capabilities, more stringent exhaust cleansing methods, and so forth all add up to give "credits" towards MPG numbers even if they don't actually improve the vehicle's measured MPG. Some automakers are further offsetting their 2016 goal by purchasing or saving currently-earned EPA Credits so they can pay off missing the goal if they must.

All of this means that measuring which automakers, at this point, are making the 2016 target is difficult, to say the least. The solution was not terribly scientific, but is easy to understand and made the process of measurement far simpler. We took the EPA combined MPG rating for the manufacturer's top three vehicles by sales volume and averaged them, then added 20% to create a simulated NHTSA MPG.

So Who Is Making 2016?
Among manufacturers, all of the expected makes will meet 2016 standards almost by default. Tesla Motors, though not included in our list since reliable figures are not easily found, still shoes in since it doesn't make any vehicles for which MPG are measured. So Tesla fans can gloat if they wish. Next up are the manufacturers that have only a few vehicles in the U.S. market and who sell mostly small and medium-sized cars at that. Those include Mazda and Honda and thanks to several updates in recent models, Subaru. Mitsubishi is on the cusp with making compliance; it achieves it if no replacement for the Evolution is offered, but could fail if the Evo were to return without MPG improvement. So we can assume Mitsubishi will also make the 2016 grade.

Less obvious were the full-line manufacturers. Of those, Nissan will hit the mark and, if MPG estimates for the new 2015 Camry come to fruition, so will Toyota. Both Hyundai and Kia are also going to make the 2016 requirement with room to spare by our measurements. As for the Detroit gang, only Chevrolet is looking to have an easy time of hitting 2016 CAFE. Ford struggles thanks to the F-150, but recent improvements for 2015 should push it over the top. Fiat-Chrysler, however, is not likely to make it and will be glad they invested heavily in credits while they get the higher-geared transmissions and stop-start options spread around their lineup. If the new Renegade and its Fiat counterpart sell well in the United States, that could go a long way towards helping their totals.

Long story short is that nearly every major manufacturer in the U.S. is going to make 2016 requirements, or at least come very close to doing so. Some vehicles in the lineup actually meet or exceed the even more stringent 2020 requirements. These include the Nissan Rogue and the Toyota Highlander in their categories. We'll likely see more vehicles hitting that higher mark as we begin seeing 2016 model year vehicles entering the scene a year from now.

It is nice to see that we're not likely to see a lot of "automotive zombies" like we did in the 1970s.

John Goreham wrote on October 12, 2014 - 12:40pm Permalink
Hopefully some of the anti-car fanatics will understand the important part of this story, which is that CAFE of 54.5 does not mean that the majority of cars and light trucks will be coming anywhere close to that in average MPG now or even later. Pretty tired of reading that only EVs make the goal on forums. As the story points out, Mazda has the top fuel efficiency of any major automaker and meets the next goal already. Mazda sells no hybrids and no EVs in the US.
Dan Caveney wrote on July 14, 2015 - 11:27pm Permalink
Chevrolet is not a Corporation. GM is, and therefore you need to include Cadillac and Buick into that equation. You might also note that it is against the law to PLAN to simply pay the CAFE fine on the premise that it is against the law to conspire to break it. So you'll not ever see automotive execs admit to this; they'll just say "oops, we never saw that coming".