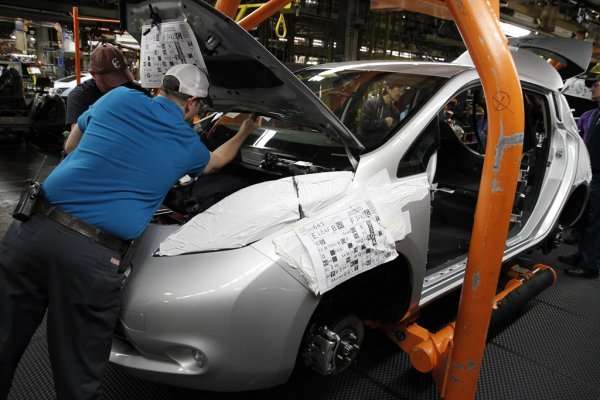 On the recently-released NADA vehicle retention guide, the association gave low rates to electric vehicles in general, scoring the Chevrolet Volt and Nissan LEAF at about a 40% retention rate. Why so dismal?
Advertisement

The latest value retention guide from the North American Automobile Dealers Association (NADA) had a few surprises in it, including, for some of us, the poor expectations for resale value for electric vehicles. Most hybrids had a decent-enough score, with the Lexus CT, Toyota Prius, and Kia Optima being in the top three at about 54 percent and better. This means that a 2011 Kia Optima Hybrid would be worth about 54 percent of its new cost when traded or sold. As a quick note, Toyota also dominated the pickup truck list (see that here).

Yet with electric vehicles, of which NADA only lists two, the numbers are far more grim. The lowest hybrid car retention rate was the Mercedes-BEnz S-Class at just under forty percent. The Chevrolet Volt, the first of two on the EV list, barely beat that at just 41.6 percent. The Nissan LEAF came in under that at 38.2 percent retention rate.

Why would EVs have such low numbers and bad resale value at only three years of age?

NADA doesn't explain its reasoning in its Perspective release, merely noting that in 2011 (the year they go from), only the Volt and LEAF were broadly available on the U.S. market. This explains one reason, but not all of it. 2011 was the first-generation for both vehicles and both of them had troubles that first year or so with recalls, some PR issues, etc.

Another reason, however, isn't stated directly, but may be another portion of the cause - it is mentioned in the paper, but not explicitly given as a reason for retention values. That reason is price tag. In 2011, the MSRP for the Volt and LEAF was higher than it is now, with some dealerships tacking on even more to the price because of high demand. In January of last year, Nissan lowered the LEAF's price by $6,400 and the Volt followed with a $5,000 price reduction on the Volt. This put the LEAF at under $29,000 before incentives and the Volt at almost $34,000 before incentives.

Finally, we have to speculate about batteries. Both the Volt and the LEAF have large battery packs. Far larger packs than any hybrid has and the cars are dependent on those batteries to operate. If the battery doesn't work (aka "bricks"), the car is as useless as a gasoline-powered car with no fuel or spark plugs. Those early batteries were the subject of a lot of speculation concerning their true usable lifespans. With the LEAF in particular, this was a hotly-debated issue as the car has no thermal management to maintain battery temperatures. After three years, the warranties on the batteries have a large bite taken out of them and the batteries themselves are expected to have a smaller overall storage capacity - they lose capability over time. It only gets worse from there.

As a side note, we also have to wonder what, exactly, the secondary market is for these EVs. By most accounts, owners of the LEAF and Volt are not commonly trading them in yet. A quick look at Autotrader.com for used Volts and LEAFs in the Los Angeles area (traditionally the largest market for these cars), used prices for them seem to be about what the NADA guide would suggest they should be. A 2011 Volt is averaging around $24,000 and the 2011 Nissan LEAFs on offer were averaging around $18,000. The caveat, however, is that there were only a handful of listings for either car in the LA area.

Whatever the reasons for NADA not liking the expected retention value for electrics, it should be interesting that the first-generation of mass-produced EVs is scoring so low.

Luke Ottaway wrote on April 6, 2014 - 1:50pm Permalink
It makes sense, particularly given the reason you stated about reduced purchase price. Today's Leafs and Volts are essentially the same vehicles as the 2011 models plus minor tweaks, and they cost far less than the initial wave did. And if I can buy a brand-new Leaf for $21,000 (assuming I get all of the federal tax credit), I'm not likely to buy a 3-year old version of essentially the same car for just a few thousand less.
John Goreham wrote on April 6, 2014 - 4:25pm Permalink
You're both right Luke and Aaron. Although EV advocates have argued this point with me. And I value their opinions. I think the federal tax deduction of $7500 and the state rebates, like California's $2,500 rebate, play a big role. Those only apply to the first, new, sale of an EV. So a new Leaf costs MSRP minus about $10K. No sane person would ever pay more than that amount for a used Leaf even if it was only 1 day old. In Georgia, a huge market for Leafs, the taxpayer kickbacks add up to 30% of the MSRP. There is most of the devaluation right there. Then, as you say, the cars also depreciate because the manufacturers are artificially lowering the prices of the EVs as they mature (partly because they get ZEV credits, too complicated to explain here). What I like about the NADA study is they don't say too much. They just tell us what is actually happening with the prices. Leaf's are not worth much used. - By the way, just subjectively, there does seem to be a lot of selling and trading in of Leafs, Volts, and Pius's vehicles going on. At least a lot of chatter about it. Particularly on the i3 fan sites.
VFanRJ wrote on April 6, 2014 - 7:23pm Permalink
"I think the federal tax deduction of $7500 and the state rebates, like California's $2,500 rebate, play a big role." I'm a huge EV advocate but there is no way to deny this statement; it's definitely the #1 factor. My guess is that #2 is the inability of potential buyers to confidently measure the health of the battery of an EV.
Aaron Turpen wrote on April 7, 2014 - 6:16pm Permalink
Batteries have an expected devaluation (in terms of capacity) over time, but you're right in that there is no actual, real-world, subjective measurement or real set of data to take that from. Joe the Carbuyer can guess that the engine in an Altima or Titan will have X amount of life in it at Y amount of probable service costs given its current mileage numbers. With batteries, though, there's no ad hoc guesstimation available to the average buyer. For example, our purchase of a used Mazda5 had me looking at the vehicle and guessing how much it would likely cost, annually, in service and repair given its (then) 36,000 mile odometer. For me, a big selling point was that the engine is chain timed, so no expensive timing belt service interval means it will cost roughly half as much to service over 100,000 miles as a belt-driven engine would. With a battery, though, I'd have no frame of reference to make the same estimates.
Guy Hall wrote on April 9, 2014 - 7:26am Permalink
It's not only that the prices have been falling, but the technology has been improving. The 2013/2014 LEAF models have significant improvements over the 2011/2012 models which include a doubling of the charging speed, 2 cubic feet increase of space in the trunk, ~10% more range, ~10% more efficient use of the electricity, and better heater. I love our 2011 LEAF with 41000 miles in three years, and it is working just fine, but the 2013/2014 models are attracting my attention. Another point in the positive direction for used LEAFs, is the increasing availability of fast chargers. These increase the value of all LEAFs by providing much more range confidence. If for an unplanned reason I suddenly need some extra range, I can stop off at one of these for a few minutes to add some extra mileage (generally free or at a price less the cost of gas.
Ozkar wrote on June 19, 2015 - 2:29pm Permalink
Well I just tried to trade in my Nissan leaf 2015 only after six months after I purchased and to my surprise, found that is worth $12,000, even the GM at the dealer wouldn't believe it, I am in the car business and was pretty sure I will be upside down but not over 20 k! , Nada by doing that, blindly setting prices on market value certainly are killing the EV industry, who wants to be a big time looser? I mean in only six months?, I wish I had someone to inform me before the purchase about the risks of trading and loosing 62% of the value of the vehicle, wonder if there is a legal ground to demand Nada, or the manufacter for this
guy t hall wrote on June 19, 2015 - 8:32pm Permalink
Ozkar, Which model did you buy and how much did you pay for it? Guy