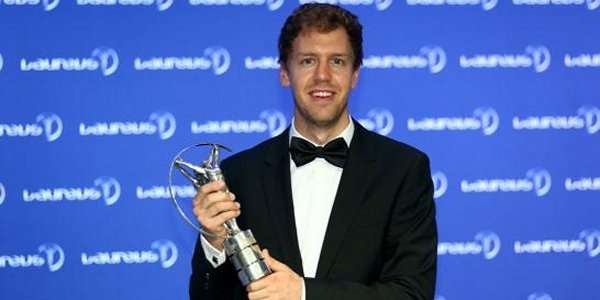 Sebastian Vettel gets Sportsman of the Year

At the 'Oscars of the sports world,' Seb beat out some big names to receive the coveted award, which was presented to him by Formula One legend Emerson Fittipaldi.
Advertisement

Infiniti Red Bull Racing star Sebastian Vettel was named Sportsman of the Year at the annual Laureus World Sports Awards in Kuala Lampur. In the fifteen years since its founding, the awards have become known as the "Oscars" of teh sports world with many great names and star athletes being recognized therein.

This year's competition was fierce, with finalists including Usain Bolt, Mo Farah, Lebron James, Rafa Nadal and Cristiano Ronaldo. The race car driver took the title, however, and his award was presented by fellow sportsman and double F1 World Champion Emerson Fittipaldi, who was also one of the 46 judges on the Laureus Academy judging panel this year.

"When I was on stage and saw so many of the greats," said Vettel, "it was truly a very special moment. All the Members of The Academy are true greats – heroes, legends and to see some of them on stage, others in the room and on the red carpet, makes this night very special."

Vettel is the current World Champion in Formula One and has held the title four years running, first achieving it in 2010, a year after joining Red Bull. He was the youngest driver ever to win the World Drivers' Championship and became the youngest ever double-champion in 2011. He is 26 years of age and has a professional record of 39 wins, 62 podium finishes, 1,451 career points in F1, has achieved 45 pole positions and recorded 22 fastest laps on record. He began his professional career in 2007.