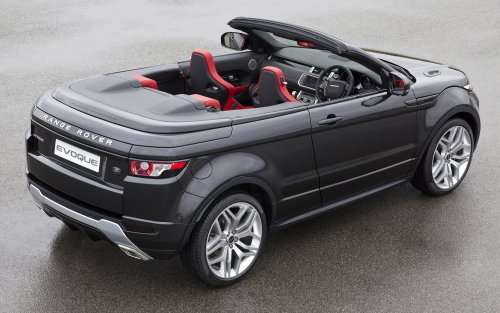 What Car? has confirmed that Range Rover plans to take the Evoque Convertible to production. Find out when the hot 2012 concept will hit showrooms.
Advertisement

When the Range Rover Evoque Convertible concept debuted in 2012 at the Geneva Motor Show, it instantly sparked conversation and speculation. Then, earlier this year, it was said to have not been an option for production.

Well, that may be untrue. A What Car? report says that a Range Rover insider has confirmed that the Evoque Convertible will go to production sometime next year due to interest from consumers. The Range Rover Evoque itself has already outsold expectations, with more than 220,000 of them having been built in only two years.

The convertible will be based on the three-door coupe model, just as the concept was (pictured), and will have a fabric roof too. When the convertible was shown, Rover engineers said that the design of the Evoque's chassis meant that the convertible didn't require any structural changes, which means it would be easier to take to production. One of the Evoque's design features is that it's not "top heavy" like some SUVs and crossovers can be because of that structural design, which is why the luxury SUV is so often described as "sporty."

Given an Evoque cabriolet, the market would have a rival for the Audi TT Roadster and BMW 3-series drop top. The question is whether or not, like those others, the Evoque would come to the U.S. It's quite possible that the convertible will be for the European market only, though that seems unlikely with the solid sales record the Evoque has had here so far.

The Evoque Convertible, if this rumor is true, would go into production in the late second or third quarter of next year, likely as a 2015 model to hit showrooms in the late fall or early winter.