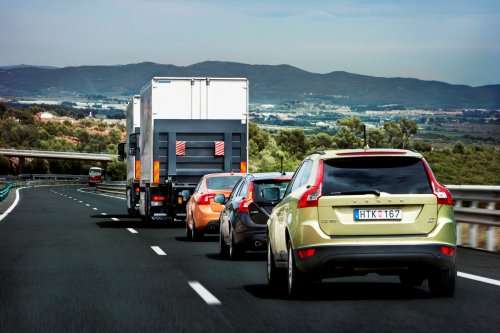 The SARTRE project has now begun testing on public roads in Spain as Volvo and its allies take connected vehicles on the highway in a first-ever public road demonstration of the potential of road trains. Check out the video.
Advertisement

The Safe Road Trains for the Environment (SARTRE) project took a big leap forward this week by leaving the test track and going to public roads. In a first-ever test, five Volvo vehicles traveled 200 kilometers on a highway near Barcelona, Spain.

The SARTRE project is a collaboration between the European Commission, Ricardo UK Ltd, Appluss + Idiada, Robotiker, the IKA, the SP Technical Research Institute, and Volvo's Technology and Car corporations. The idea is to "road train" vehicles through wireless connections so that a professional driver (such as a bus or heavy truck driver) leads a "train" of vehicles along a common highway. Participants can enter and leave these Road Trains without disturbing the overall flow of the train. The safety and driver fatigue implications are obvious.

The safety systems inherent in Volvo vehicles are combined with new technology from the other participants in the project to create a way for vehicles to connect (or disconnect) at the driver's will and travel together in a close line safely along a highway.

The test outside of Barcelona involved a Volvo XC60, a Volvo V60, a Volvo S60, and two trucks (one in convoy, the other leading) driving for about 200 kilometers at about 85km/h. The cars were gapped between 5 and 15 meters apart to test how the train might be used to increase fuel economy through close following which reduces air drag.

Volvo says that drivers will be able to do things like read a magazine, eat lunch, read a book, or work on their laptops while commuting - safely doing all of the things many commuters do today without the safety of a road train.

This road test in Spain is the first of many planned for the project as it moves from theory into the real world. Here is video from the first test, courtesy of Volvo and GreenBigTruck.com: