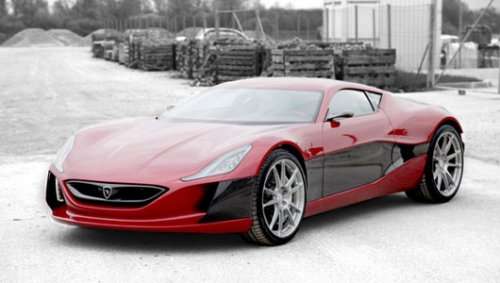 Now.. imagine that it's doing all of this without engine noise, at a top speed of 185 miles per hour and for up to 372 miles. Because it's electric.

That's the Rimac One, a concept car that's now entering production in, of all places, Croatia. Dreamed up by Mate Rimac and 20 engineers to found Rimac Automobili in Zagreb. The company plans to build just 88 of the cars and they will sell for almost a cool million at $980,000. They're being sold first come, first served and the company has begun taking deposits.

The Rimac One debuted last year as the Concept_One at the Frankfurt Motor Show. It features a 92kW LiFePO4 (lithium-iron phosphate) battery pack and four liquid-cooled electric motors, one mounted in each wheel of the car. The tires, built to take on this kind of torque, are made by Vredestein in the Netherlands as the Ultrac Vorti, which reported sell for several thousand dollars each.

Those wheel-mounted motors are independently controlled, each with its own inverter and reduction gearbox, giving completely independent all wheel drive. The Rimac One is built in Croatia and in-house, and each car will be entirely hand-made.

Two videos show off the propulsion system and the capabilities of the One: