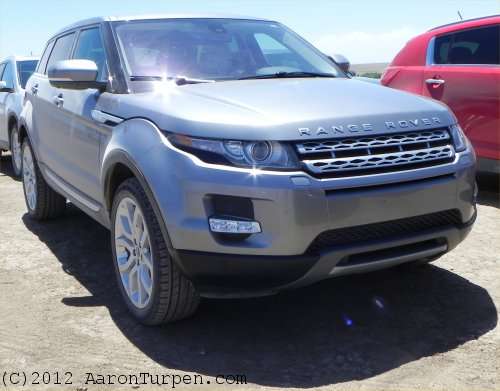 The Range Rover Evoque has its first birthday

Land Rover's newest model is selling extremely well and the company is celebrating the SUV's first year in production.
Advertisement

Demand for the Range Rover Evoque is high and the newest SUV from Land Rover is selling well all over the world. On July 4th, as Americans celebrated their Independence Day, the British car maker celebrated the first anniversary of the beginning of production for the Evoque.

When the first of the 2012 Evoque SUVs rolled off the assembly line in Halewood, United Kingdom this time last year, Land Rover had already sold over 18,000 of them to advance buyers around the world. By the end of 2011, more than 80,000 of the new sport utilities had been sold as Land Rover struggled to produce enough to go around.

The Evoque appeared at trade shows, car shows, and special events around the globe, garnering more than 110 awards, including several Car of the Year awards from various press and automotive groups. These included the coveted Car of the Year choice from Top Gear Magazine, World Design Car of the Year and North American Truck of the Year at the New American International Auto Show (NAIAS), and many others. There's no doubt that the Evoque is a great design and beautiful SUV. What's more, it's as plush inside as anyone can expect, fitting with the Range Rover nameplate.

Built alongside the Land Rover Freelander 2 in Halewood, the Evoque is 75% UK-sourced and exported around the globe, bringing in over £2 billion in export value to the Kingdom and over 4,000 jobs. Even under full production, Rover is having a rough time keeping up with demand for the 2012 Evoque.

With a full year of production under its belt and more to come, the Evoque is definitely one of those vehicles that will be remembered in history as a game changer. It's fast becoming the gold standard to which other luxury SUVs are compared. In my opinion, deservedly so.

Tsingshan's Threat to Tesla: EV Maker Is In Battery Crosshairs
Tesla-Funded Research Reveals One of The Biggest Mysteries of EV Battery
END_OF_DOCUMENT_TOKEN_TO_BE_REPLACED