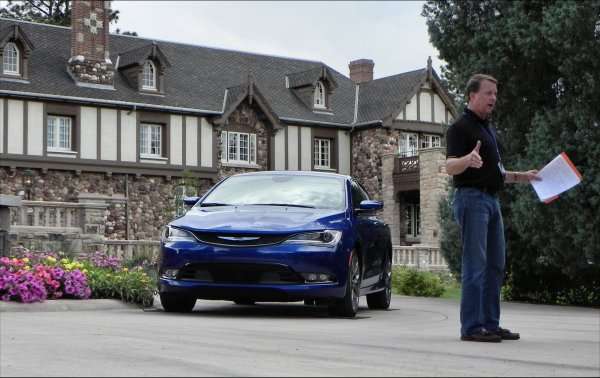 The Pentastar TigerShark cocktail that is the 2015 Chrysler 200

At the #Denver200 event, we talked with the lead engineer for the 2015 Chrysler 200, drove two models of the car, and were wined and dined in a historic mansion on Denver's south end. The new 200 is impressive, even without fancy drinks named Pentastar and TigerShark.
Advertisement

We arrived in Denver, Colorado on a blisteringly hot day driving a press loan vehicle - a huge 2014 Ram 3500. We passed through the city to the south end, into the suburb of Highlands Ranch where we pulled into the parking lot of the historic Highlands Ranch Mansion. There, we ingloriously hogged up half the lot with our gigantic rig and stepped into the swelter. The "we" was myself and fellow automotive journalist Tim Esterdahl, together known generally as "Hickboy and High Falutin" and the Wybraska contingent of the Rocky Mountain Automotive Press.

Our goal was simple: get our hands on the new 2015 Chrysler 200 in as many trim and model forms as possible, drive the car through the posh streets of Highlands Ranch, and look as unprofessional as we could while we did it. The latter strategy is largely to throw off any would-be hangers on who have dreams of riding our coattails to greatness. Besides, as Tim put it, he needed a Lug to help him load a big sliding glass door into that monster truck on the way back home. Which should give you a hint as to the kind of respect I generally engender in friends and colleagues. I digress.

We were greeted at the mansion by fellow journalists, media relations people, and Chrysler representatives to include Wendy Orthman, our regional PR, and John Nulty, the Chief Engineer for the Chrysler 200. Also on display were two beautiful examples of the car, which was to be our focus for the afternoon: the 2015 Chrysler 200C and the 2015 Chrysler 200S. The C is the more luxurious branch of the 200's "Y" while the S is the sportier option on the other arm. Both have several trim and package options to add to their base offerings, including two engines, an all-wheel drive option, and a lot more. Not to mention the segment-first nine-speed automatic transmission.

After a brief presentation by Chrysler, which included some very in-depth background on the car, its Alfa Romeo chassis, and the awesome TigerShark (the consensus is that if you're going to say that word, you have to say it boldly, like a rock star) and Pentastar engine options. Plus information on that aforementioned 9-speed tranny and the beautiful engineering that went into the already stunning Chrysler 200.

Here are two features that immediately caught my attention. First, the AWD system is automated and not permanently coupled. Instead, the car is a front-wheel drive until the AWD is needed, at which point the hydraulic, viscous coupling connects the rear drive to the system and power is distributed in a range, as needed - up to 60 percent going to the rear wheels. On top of that, the switch is automatic - no driver input required. It senses driving conditions, moisture (rain, snow, etc), and more to decide when to engage AWD. For the driver, it's seamless (as we were to later find out).

Secondly, there is a new type of Adaptive Cruise Control and Lanesense Departure Warning-Plus. The Adaptive Cruise Control can not only adjust cruise speeds to match the vehicle in front of the 200, but it can even bring the car to a full stop and then accelerate forward again in stop-and-go traffic situations without driver input on the throttle or brake. Add to that the Lanesense system and you have a lane departure system on the 2015 Chrysler 200 that doesn't just warn of a lane departure, but actively steers the car to keep it in its lane if the driver does not correct the wandering. Put together, this obviously allows nearly-automated driving. When we put this to the test, it wasn't quite as good as a fully self-driving vehicle, but it's getting very, very close. You can see that in our video here:

Our impression of the 2015 Chrysler 200C is similar to what Patrick Rall found on his review of the car. It's a luxurious, solid performer with a lot of great features. Even fully-loaded, as we drove it, this is a premium-level midsize sedan delivered at not much over $36,000. Base MSRP for the 200C AWD is only $30,195.

In the 2015 Chrysler 200S, we were also impressed with the fun factor this car delivers. While not as sporty as some might hope, it's very nicely engineered and handles well. Entry level MSRP for this model, with AWD, is $28,695; and, as we drove it - as loaded as it could get with technology and goodies - it rang in at $34,065 delivered.

After driving these great cars in and around the Highlands Ranch, Colorado area, we then came back to the Highlands Ranch Mansion for cocktails. We were offered a choice of a vodka and fruit juice mix called a Pentastar and a beer and lemonade mix called a TigerShark. From there, we hobnobbed with Chrysler's contingent of experts and carefully crafted our "idiot journalist" facade to catch them off guard and find out the nitty-gritty on the new 200. In the process, we were invited to a NASCAR race, offered tickets to a Motley Crue concert, and asked the classical guitarist in the background if he knew any Metallica songs. For those wondering, the answers were: scheduling conflict, let me know when, and a smirk.

Over dinner, we jabbered with other journalists over food and drink. Most of this is a vague recollection to me, as automotive journalists are by and large a boring lot, but I do distinctly remember the desserts, which involved chocolate cake dipped in chocolate and lemon squares. A few women came on to me, of course (I'm a magnet, ask my wife), and one of the Chrysler reps let it drop that there will be a special Jeep event in our area soon as well. We'll keep you appraised.

All in all, though, our impression of the 2015 Chrysler 200 in both the C and S models was positive. This car is a must-do for Fiat Chrysler Auto and is meant to be direct and hard competition for the Toyota Camry and Ford Fusion in the contentious midsize sedan segment, which comprises about one in every six vehicles sold in the U.S. For FCA, it's do-or-die as well, as they need to build sales in the fuel-efficient car segments to make CAFE requirements. My impression is that this car will do well towards that goal as it's a beautiful, well-built, and nicely-performing car with a lot of competitive offerings for the midsize buyer.