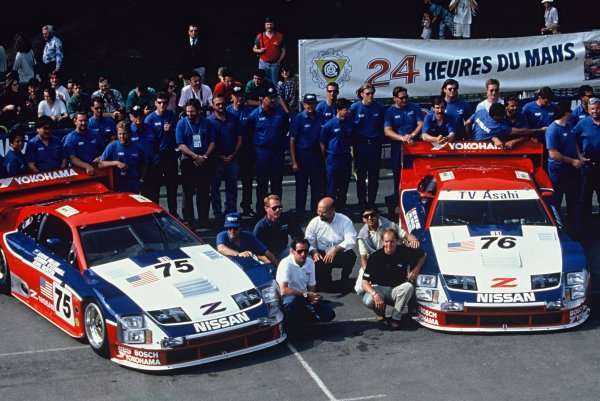 On the twentieth anniversary of the 300ZX's Le Mans victory, the car will show up to commemorate that by once again showing up on the track.
Advertisement

Now, twenty years later, Nissan and Millen are back with the No. 75 300ZX (chassis number 7), along with several of the original crew members from that 1994 year, to compete in the 2014 Rolex Monterey Motorsports Reunion at Mazda Raceway Laguca Seca Raceway in Monterey, California. The races take place August 14-17.

The No. 75 Nissan 300ZX features a chromoly steel tube structure, steel and aluminum body, and a 2960cc twin-turbo VG30DETT V6 going through a five-speed Nissan transmission using Hewland gears. That engine outputs more than 800 horsepower. The No. 75 will compete in an arena where 550 vehicles have been invited to take to the track as part of the annual Classic Car Week event.

"From the original 1994 Le Mans inspection sticker to the twin-turbo V6 and Nissan 5-speed Hewland crashbox, the No. 75 is the real deal, and we can't wait to see it back on the track at speed with Steve Millen at the controls," said Pierre Loing, vice president, Product Planning, Nissan North America, Inc. "It's also fitting that it will be sharing the paddock space with our new 600-horsepower Nissan GT-R NISMO – which might just give the No. 75 a run for the money today."

Millen has remained connected with Nissan through his STILLEN aftermarket performance parts company (which specializes in Nissan vehicles) and as part of the North American launch of the 2009 Nissan GT-R. Millen has the most victories in IMSA GTS history with 20, along with a series record 23 pole positions. He retired from competition in 1996 following a 1995 accident at Road Atlanta.

"The past 20 years have flown by like they were 24 hours, so getting back behind the wheel of the No. 75 with the support of many of the original team members will be like stepping into a time machine," said Millen. "People might forget that this car was so dominant in 1994 that IMSA banned its twin-turbo V6 engine. I think we've got a great chance to bring it into Victory Lane one more time against some other amazing race cars at Laguna Seca. I can't wait."

Parks McCants wrote on July 21, 2014 - 5:54pm Permalink
It's a beautiful thing. Back in the day I raced a German Ford Capri in SCCA vintage class. Good times...