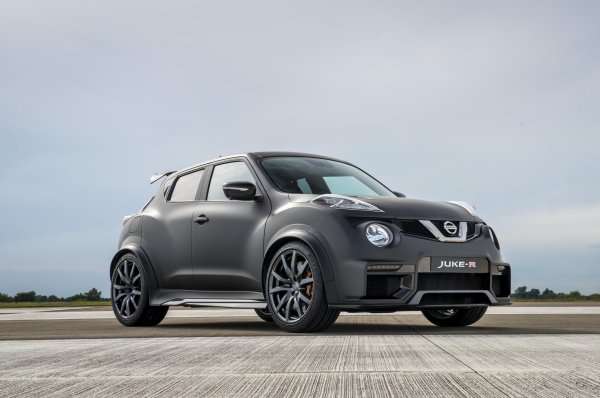 Allow us to toot our own horn a bit as we pat ourselves on the back for hitting the nail on the head with our guesses about the awesome new Juke R NISMO concept.
Advertisement

Last week when Nissan teased the Juke R NISMO, now called the Juke R 2.0 Concept, which debuted at the Goodwood Festival of Speed this week, we predicted a couple of key things about the new Juke. We said it would have 600 horsepower, that it would share a powertrain with the Nissan GT-R supercar, and that it would have a "lame aero kit add-on." We might have been wrong with the "lame" bit, but we hit all the rest in a sweep.

The Juke R 2.0 Concept unveiled at the Goodwood Festival, which opened yesterday, and was immediately labeled a "crossover supercar." NISMO driver Jann Mardenborough, fresh from the 24 Hours of Le Mans, was on hand to uncover the concept and has been tackling the famous Goodwood hill in it every day since.

Housed in the Supercar Paddock at the Festival, the Juke R 2.0 leaves for the hillclimb daily through this weekend, driven by Mardenborough.

The Juke R 2.0, or Juke R NISMO, uses the 2014 styling updates for the Juke along with NISMO specifics in the body aero kit. Under the hood is the GT-R's roaring V6, pumping to 600 horsepower.

Gareth Dunsmore, Marketing Communications General Manager for Nissan Europe said, “The Juke-R has become an iconic Crossover supercar and with the launch of the latest Juke model last year, it was the natural choice to upgrade the original Juke-R with added power and even bolder styling. The Juke-R 2.0 is a perfect ‘crossover’ of the best bits of Nissan – real innovation showcasing our Crossover prowess fused with the excitement and of the GT-R supercar engine.”

We should have video of the Juke R 2.0 hitting the hill at Goodwood soon.