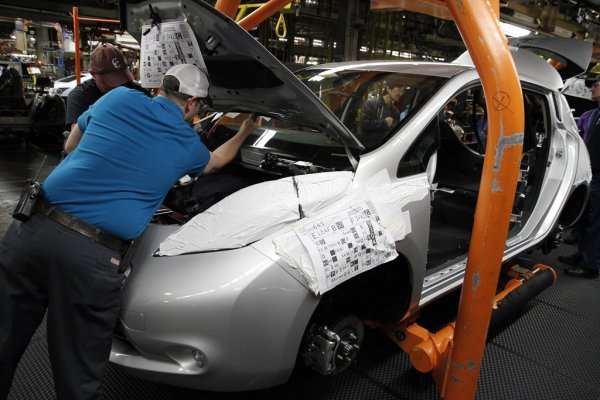 Is the Nissan LEAF safe enough?

Recently, Torque News editor Armen Hareyan asked Nissan LEAF owners what safety items they thought should be added to their cars. Their answers plus a look at safety ratings shows that the LEAF could stand some improvement when it comes to safety.
Advertisement

Our editor, Armen Hareyan, is a member of a popular Nissan LEAF group on Facebook. Recently, prompted by an article by John Goreham on the Tesla Model S, he asked LEAF owners in that group what they thought should be added to the car for safety (read it here). The answers were interesting, but when coupled with safety ratings from the two major safety testing agencies in the U.S., it became apparent that the LEAF could use some improvement.

First, let's look at forum responses. Accident prevention technologies were the first things offered as something that might be needed - adaptive braking, adaptive cruise, lane departure, etc. As another user pointed out, however, those technologies have little proof of being helpful in preventing accidents in the real world.

One suggestion that caught my eye was that the LEAF should have a "charging handle eject" from inside the car. At first glance, this just appears to be laziness. Why would I want that? Just get out and unplug! Then it occurred to me.. charging stations aren't always in the best spots in town, in terms of safety, and the forum in question was for Seattle, Washington-area owners - a place known for inclement weather at all times of the year. So being able to charge up without getting into or out of the car more than once (to plug in) would quickly become a boon and would, in fact, save energy as it would mean not losing cabin heat when opening the door to unplug. That's actually a good idea.

Outside of those suggestions, though, little was had in the discussion in terms of safety options for the LEAF. Which lead us to wonder - how well does the LEAF perform in crash tests? Perhaps the lack of options from LEAF owners for suggested safety upgrades meant that the car is already inherently very safe?

That turned out to be very close to the mark. The 2013 LEAF achieved a Top Safety Pick rating from the Insurance Institute for Highway Safety (IIHS). The Nissan LEAF achieved Top Safety titles for all renditions (2011-present). It should be noted that this does not include a "+" rating as the LEAF was not tested in the new Small Overlap Front Test due to that test being new and not likely available at the time.

The IIHS counterpart in government, the National Highway Traffic Safety Administration, gave the 2013 LEAF a four out of five star rating on all four of its tests. By this standard, it is apparent that the LEAF could use some improvement in order to rate better with the NHTSA, but that would depend on how much credence you give NHTSA testing. Many in the industry are less than impressed with the government's testing procedures for vehicle crash safety.

Our conclusion is that the Nissan LEAF, like most cars, could use some safety improvement. Adding the suggested charging port eject would be a good idea, though that is likely more for ergonomics and ease of use than it is for safety. Updating the car to do well on the new SOFT test as well as to achieve higher ratings from the NHTSA would go a long way towards marketing it as safer than many other cars - something Tesla has capitalized on heavily with the Model S, for example.

JP White wrote on January 6, 2014 - 10:41am Permalink
I just don't see auto charge port eject being very effective, just because the charging cable is 'ejected' doesn't mean it will come away physically opening the opportunity for snagging the cable as the car pulls away. If safety in rough neighborhoods is a big enough issue, then wireless charging is where the effort should be going. Ejecting only solves half the problem, how to do you plug-in safely in a dangerous location without getting out of the car? A wired charger will probably get vandalized anyway in such a location. I do think lane change and collision detection systems would be welcome additions to safety.
Aaron Turpen wrote on January 9, 2014 - 4:21am Permalink
I think the point was more towards weather and such than it was towards "rough neighborhoods" (although that was mentioned).