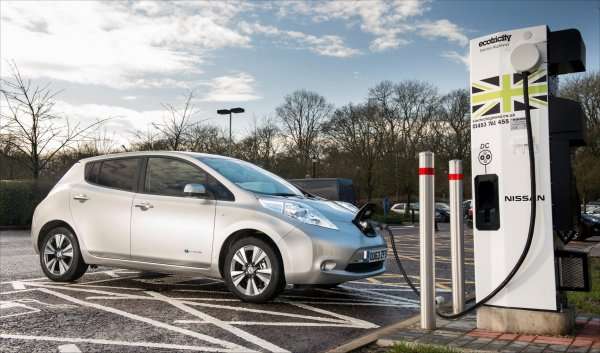 As Tesla Motors completes a charging network that stretches across continents to accommodate long-distance driving, Nissan focuses on putting more chargers into more places in order to accommodate everyday driving for the bulk of the EV buying public.

In Europe and much of Asia, the conventional charging method is the CHAdeMO standard with a Mennekes connector (here in the U.S. it's the SAE J1772 standard; Tesla uses a proprietary method). The fast-charging convention of the CHAdeMO standard allows a Nissan LEAF to charge from zero to 80 percent in thirty minutes. Nissan and its partners offers many of these charging stations free-of-charge. There are now 1,000 of them across Europe.

Europe's largest electric vehicle (EV) market is Norway, where the number of EVs using the E18 highway increased eight fold in just eighteen months after a CHAdeMO charger was installed on that route. That charger was installed in collaboration with Ecotricity, a green energy specialist, powering chargers from green electricity sources - mostly wind and solar.

With the installation of a similar charger on the M25 motorway south of London, England (one of the busiest roads in Europe), drivers traveling west of London towards Kent and the rest of Europe now have easy access to recharge quickly.

In the United Kingdom, a network of 195 chargers is continuing to grow, allowing drivers of EVs to travel much of the nation easily. 124 of those chargers were installed in 2013, thanks to partnerships with companies like IKEA, Roadchef, Moto and Nissan dealerships.

Unlike Tesla chargers, the CHAdeMO chargers can be used by anyone with a compatible EV, including Model S owners who have the conversion plug for their proprietary system to the CHAdeMO standard (they're only $1,000-$2,900 here in the U.S.). Whether driving a Nissan LEAF, a Citroen C-Zero, or any of the other popular EVs in Europe, people can use this 1,000-strong plug-in network to keep themselves on the road.

It is expected that more than 1,800 quick-charge stations like these will be available across Europe by the end of 2014. Compatible plug-in vehicles sold in Europe include the Nissan LEAF and e-NV200, Citroen C-Zero, Mitsubishi i-MiEV and Outlander PHEV, and the Peugeot iON. Other vehicles may have adapters, including the Model S, to allow them to use the stations as well.