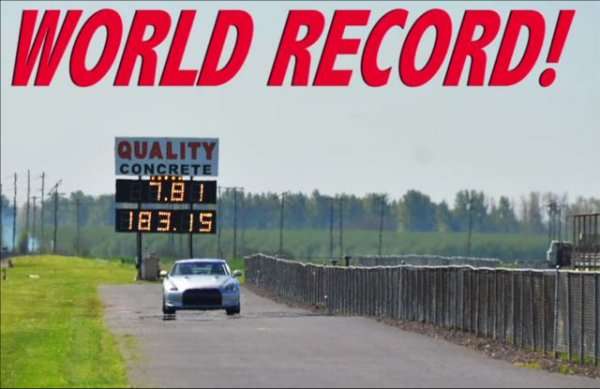 Who owns the fastest GT-R supercar in the world? Well, we know now. Two tuners have held the record and a new rivalry has been assumed. We have video.
Advertisement

Until now, AMS Performance has held the title as world's fastest, street-legal Nissan GT-R on the quarter mile. West Chicago, Illinois-based AMS took the title in 2008, along with a lot of other tuner challenges and races that year, and continued to dominate the fastest GT-R list with the Alpha 12 Omega car until now.

Extreme Turbo Systems clocked a full tenth of a second faster on the quarter, despite a slower overall speed, taking the title away from AMS. The time to beat was 7.984 seconds (which AMS did at 186 mph) and ETS killed that at 7.81 seconds (183 mph) on their quarter-mile run.

The fight for fastest GT-R, of course, won't end here. It's likely that a new year will mean new tuning for the Alpha 12 Omega and a comeback attempt on the track. Still, this is a big win for ETS, who will be enjoying the recognition of toppling the king of the hill.

In the above video of the record being broken, you'll see the ETS GT-R doing tire warmups and line jump tests before setting up for the actual run. When the light turns green, the car leaps forward as all four wheels press the pavement hard. The low crouch of the windup is very evident and in just under eight seconds, the time posts and you hear the lucky witnesses to the run screaming in triumph.

Just to make sure of it, since it can take several days for the record to post, the ETS English Racing driver made a backup run of 7.852 seconds with the same speed. So it wasn't a fluke. The modifications to this car are fairly extensive, including turbo kits, a titanium exhaust system, stroker and ETS mods, an in-house transmission build, and more. The complete list is on the YouTube description for the video above.

Now, let's wait a few and see if AMS returns with an even faster pavement scorcher!