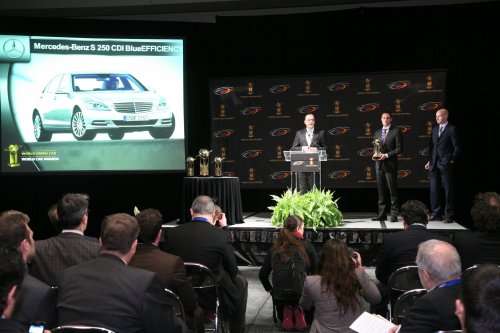 The S 250 CDI beat out 22 other contenders for the win, giving Mercedes the second win in the history of the World Green Car award from Bridgestone after being selected by three experts representing three regions of the world.
Advertisement

The range of 23 cars was narrowed to three finalists, including the Ford Focus Electric and the Peugeot 3008 Hybrid as well as the ultimate winner, the Mercedes-Benz S 250 CDI BlueEFFICIENCY. Mercedes won in 2007 with its E320 Bluetec making this the second win for the company.

The new 2012 S 250 CDI is the first time the European automaker has put a 4-cylinder engine in an S-series sedan, making it the most fuel-efficient luxury sedan in the world. It's fuel consumption is only 5.7 liters per 100km (41.2mpg).

The World Green Car award is presented by Bridgestone and judged by a panel of three automotive experts, one from North America, one from Europe, and one from Asia. To be eligible, a car must be all-new or substantially revised, as well as in production and introduced for sale or lease in quantities of at least 10 in at least one major market before May 30, 2012. Those qualifying are then judged for tailpipe emissions, fuel consumption, and use of a major advanced power plant technology aimed specifically at increasing the vehicle's environmental responsibility.

A round of 64 jurors from the world automotive press and the World Green Car steering committee narrowed the list down to the finalists, which are then voted on by the three experts to find a winner. Ballots were tabulated by the accounting firm KPMG.

Previous winners of the World Green Car award were the Chevrolet Volt in 2011, the Volkswagen BlueMotion in 2010, the Honda FCX Clarity in 2009, the BMW 118d Efficient Dynamics in 2008, the aforementioned Mercedes-Benz E320 Bluetec in 2007, and the Honda Civic Hybrid in 2006.

The World Car Awards are given every year at the New York International Auto Show after announcements at other shows lead up to the finalists.

Toyota's First EV Will Have a Name of BZ: Toyota BZ
First Videos From Inside The Boring Company's Las Vegas Loop
END_OF_DOCUMENT_TOKEN_TO_BE_REPLACED