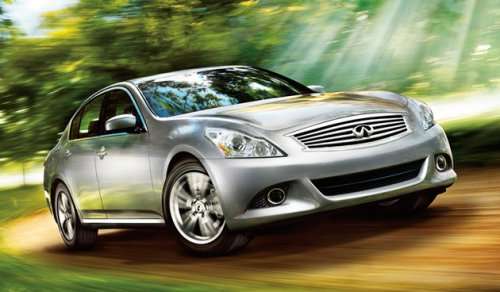 Infiniti has trademarked several names, including G35h, G30t and G22d, possibly pointing to future plans for a hybrid, diesel, and more as early as 2014.
Advertisement

The automotive rumor mill is abuzz with the latest hint at what could be the future of Infiniti: hybrids and diesels. Trademarks filed for the titles "G35h", "G30t", and "G22d" started the speculation. These are all current models with the last letter added hinting at a possible future version. Of course, Nissan could just be protecting its nameplates from being hijacked, but that's very unlikely. Several outlets including mainstream sites and several enthusiast blogs have jumped into the speculation. The more realistic are largely given by Car & Driver's David Gluckman, but adding in a few tidbits from other sources gives a more complete picture.

The Infiniti G37 became the G35 and the line saw the G25 added on last year. The "G" line has been the luxury maker's competition against the dominating BMW 3-series. Adding the "h" on the end would denote a hybrid option. Adding in the usual cycle of 6 years between design changes for automakers in this segment, we'd see a new G35 design in 2014 - just in time for a hybrid addition, some might think.

Jumping ahead, we see the G22d addition, which is actually the easiest of the bunch to be reasonably sure of. The G-line hasn't had a diesel variant yet and with diesel being king in Europe, it was only a matter of time before Infiniti offered one. Most likely with a 4-cylinder engine offering thanks to Nissan's new deal with Mercedes; specifically the OM651 diesel.

That same deal may point to the answer for the G30t trademark, says Gluckman, and he makes a good point. The "t" normally means "touring" in the Infiniti line, but it could also be a marque for "turbo." In that case, the other engine in the Infiniti-Mercedes deal was the M274 gas engine - a turbo. Despite both Renault and Nissan having both turbo and diesel offerings, it may be that the luxury arm of the company is aiming for more refinement and the deal with Daimler-Mercedes may be to that end.

This won't be Infiniti's first foray into hybrids, of course, with the M35h already going the rounds. A G35h would be somewhat smaller and lighter than the M35h, possibly giving the car an even faster powertrain. It also wouldn't be the first diesel offering in the Nissan lineup. Nor the first turbo gasoline. All of these, however, would be new to the G line of Infiniti.

Tsingshan's Threat to Tesla: EV Maker Is In Battery Crosshairs
Tesla-Funded Research Reveals One of The Biggest Mysteries of EV Battery
END_OF_DOCUMENT_TOKEN_TO_BE_REPLACED