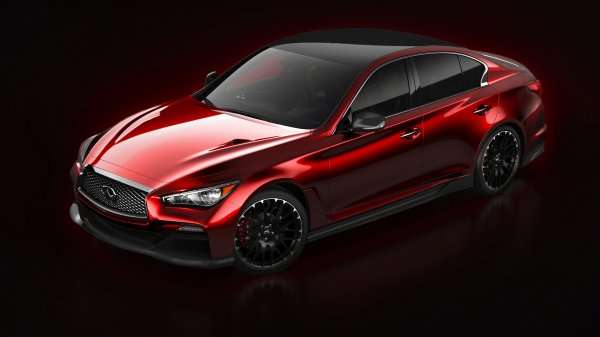 With a thirty-second commercial that decidedly connects Infiniti's championship Formula One background with the new Q50 sedan concept, the premium automaker has revealed the new Q50 Eau Rouge Concept ahead of the Detroit show.
Advertisement

The first image and an animated commercial spot for the Q50 Eau Rouge Concept, which debuts at the 2014 North American International Auto Show (NAIAS) in Detroit a week from Monday, has been released by Infiniti. They show a compelling, beautiful car that re-ignites the brand's premium sports appeal.

The design of the Q50 Eau Rouge is lower, wider, and makes extensive use of aerodynamics and carbon fiber manufacture. The roof and door profiles remain in sync with the production Q50 on this concept, but the overall look is definitely muscular and refined.

Carbon fiber is used in the front splitter, rear diffuser and side sill skirts. It also makes up the roof and door mirror casings.Lightweight forged alloy wheels measuring 21 inches make the corners while a dual-exit exhaust creates the sound sports drivers adore.

"From our shared passion for performance with Infiniti Red Bull Racing grew a collective desire to produce a vision of what a high-performance Infiniti Q50 could look like," said Alfonso Albaisa, Executive Design Director at Infiniti. "The design has a number of distinctive Formula One inspired touches. In particular, the sculpted front wing assembly and the rear aerodynamic packaging take their cues from the RB9 race car."

Now here's the best part. If you're a part of Infinit's social fan club on Twitter, Facebook or Weibo, you can unveil the Q50 Eau Rouge ahead of the show by creating your own Q50 concept in a virtual garage. Every time you and others share your creation(s), another piece of the actual concept will be unveiled. Progress can be viewed at unveil.infiniti.com.

The official unveiling of the car is on January 14 at 9:20 am ET in Detroit.