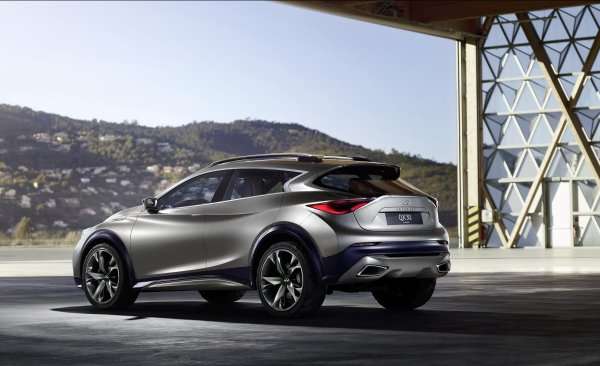 The world premier of the Infiniti QX30 Concept, a new small crossover from the premium brand, will happen at the Geneva International Motor Show early next month. Infini has released a sneak peek and some information on the new cross as lead-up to the unveiling.
Advertisement

The above photo was released by Infiniti ahead of the QX30 Concept's official unveiling in Geneva. This small crossover will be a global platform for the company, who seems likely to put it into production. Nissan's premium brand distinctly lacks a compact crossover, which are a fast-growing class of vehicle in the luxury segment in most major markets globally. As the model name suggests, this would likely be powered by a 3.0-liter six-cylinder engine, making it a sporty little cross on par with what competitors are offering in the luxury compact crossover market.

Most of the focus on the Infiniti QX30 per the brand's release has to do with its design. The QX30 has elements that come from the larger QX60, QX80, and others in the brand's line, of course, but adds a few unique points. The hood and grille, for example, are more sedan-like, appearing more like the Q50 than the QXs. The wheels are outlandishly large as well, being 21-inches, according to Infiniti, a full five inches larger than the standard wheels on the QX60.

Most interestingly, and perhaps pointing to some future language for the Infiniti crossover line, are the accent cuts along the bodywork of this concept. The QX30 has a "dual wave" look, as Infiniti calls it, which is striking and very appealing. Aluminum is also promised as a prominent part of the QX30's build.

The design also has some interesting, but ultimately non-functional roof racks that bend inward somewhat and curve closely with the roofline, which Infiniti admits makes them unusable for anything but adding style to the overall "tough" appearance the QX30 has at the curb.

"The QX30 Concept design conveys a sophisticatedly gritty sense of strength and durability, but tough doesn't mean rough," said Albaisa. "We've retained a sense of artistry throughout, even in the most functional of parts."

We await the full unveil of the QX30 Concept before making guesses as to the future of this little crossover when/if it enters production, but so far, we like what we see. It's bold and unusual, but not so far out there as to be unrealistic or overly polarizing.