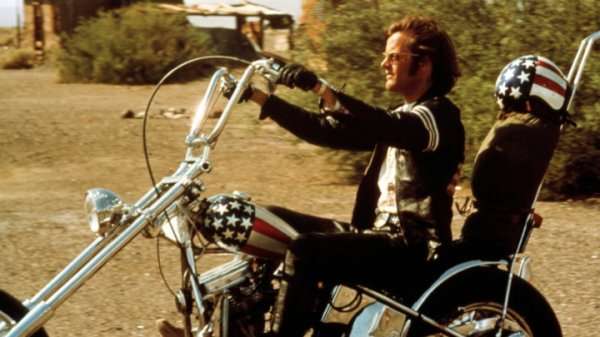 If you have a bunch of money and want to own a piece of Americana that touched Peter Fonda's leather pants, you can buy the iconic Harley-Davidson chopper from Easy Rider.
Advertisement

I mean, it's real hard to be free when you are bought and sold in the marketplace.

It's expected to bring over a million dollars and it's the most visual representation of one of the most popular culture films of all time. The Captain America motorcycle from Easy Rider is going up for auction next month. This Harley-Davidson chopper is what nearly every fan of the film recognizes instantly as a symbol of the movie and what it meant to them.

Now, the motorcycle from the 1969 film will be auctioned on October 18th, in part to profit the American Humane Association, one of Peter Fonda's favorite charities.

The Easy Rider motorcycle is owned by California businessman Michael Eisenberg, who acquired it from the legendary Dan Haggerty (Grizzly Adams) who has owned it since working as the maintenance technician on the Easy Rider film so many years ago. Eisenberg was co-owner of a theme restaurant with Easy Rider co-stars Dennis Hopper and Peter Fonda until their deaths.

Four bikes were used in the film, but this is the only one that survives as authenticated. It was used in the final scene of the drive-by confrontation in Florida wherein Fonda's character flies off to his death. The other three bikes, according to Haggerty, were stolen before the film even released. We could speculate as to what happened to them, though they probably ended up being chopped or repainted before the fame of the film caught on.

The auction house selling the motorcycle, Profiles in History, expects the Easy Rider icon to fetch $1 to $1.2 million on the block.

Parks McCants wrote on September 19, 2014 - 7:35pm Permalink
Good read! Loved this shovel-head when I was a teenager. You could buy an exact manufactured replica for years. It's not worth 1 mil to me, but then again, I'm not a big fan of Hardntails...