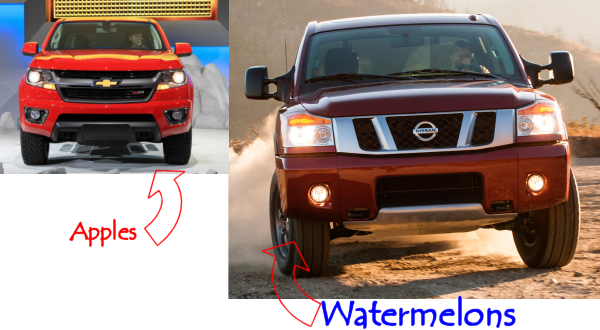 How do you make your new mid-sized pickup truck look good? Make claims about "engineering" and "advanced metallurgy" while comparing your smaller truck to full-sized, full-use, heavier-duty offerings from the competition. Chevrolet talks apples to watermelons in latest press release.
Advertisement

Chevrolet has issued a press release touting the light weight Colorado mid-sized pickup truck, saying it is 800 to 1,400 pounds lighter than the full-size pickups on the market. This is well and good, but the misleading point given in the article is that it is somehow just as capable and that the use of lightweight, high-strength steels and aluminum somehow play a key role that the others have missed. It reads:

"This weight saving is a result of the slightly smaller overall dimensions of the Colorado, along with extensive use of lightweight materials, including high-strength steels and aluminum. The outcome is a truck designed to be the most fuel-efficient in its segment. Chevrolet expects EPA fuel economy estimates for Colorado this summer."

At the bottom of the release is a weight chart of the 2015 Colorado and current-generation, full-sized pickups such as the F-150, Silverado 1500, Ram 1500, Tundra, and Titan. It should be noted that on the list, the Titan is only about eighty pounds heavier than the Silverado, putting it second on the lightweight list - even lighter than the Ram 1500 with a V6 - the only V6 on the list outside of the mis-compared Colorado.

Here's the problem: the Colorado will be a mid-sized truck, not a full-sized one. It's towing, weight hauling, and bed size will all be smaller than the full-sized comparisons on that list. So why didn't General Motors compare the Colorado to its actual competition, the Nissan Frontier and Toyota Tacoma?

Probably because while it may best them in towing capacity by about 200 pounds, it is not lighter than either of them. In fact, it's heavier than both of them.

For comparison, the heavier Titan (a full-sized truck), built in Mississippi, has a bed size that is larger than the Colorado's. Even when using the Titan's smallest bed (5 feet, 7 inches). It has a full 1/2 ton capacity and a towing capability, thanks to far higher torque from its V8 engine, that the Colorado cannot even dream to achieve.

In short, the deceptive marketing Chevy was attempting to achieve with this release comparing the small Colorado to full-sized trucks while insinuating that its superior lightweight is due to advanced materials rather than smaller size and less capability (while ignoring its actual competition in the comparison) is both a joke and a slap in the face to consumers.

Sorry, GM, but if you cannot compare your product to its actual competition, you shouldn't bother comparing it at all. Apples and watermelons don't belong in the same box. One of them will get crushed and the other will have cider on its skin.

John Goreham wrote on March 12, 2014 - 1:53pm Permalink
Chevy also made false claims about the diesel Cruze. Why let facts get in the way of a strong message? Our job is to call them on it. I loved this.
Aaron Turpen wrote on March 12, 2014 - 1:57pm Permalink
Thanks. :) As soon as I saw the press release, I knew it was full of bunk. Three minutes on Google was all it took to blow it out of the water. Not sure why automakers do this, but I suspect it has a lot to do with the number of outlets that just regurgitate press releases as stories.
Dave wrote on March 12, 2014 - 11:19pm Permalink
GM is getting desperate. The new GM full-sizes are not doing too well. And they proably fear the mid size truck will also be a sales flop so they have to bring out the marketing lies.
devin wrote on March 12, 2014 - 11:22pm Permalink
If you look at Toyota's and Nissan's websites, the Tacoma weighs 4220 and the Frontier weighs 4433 for v6 crewcab shortbed 4x4. The point of GM's press release was to show why they decided to go with a midsized pickup vs. a lighter yet more expensive aluminum bodied full size.
Aaron Turpen wrote on March 13, 2014 - 3:57pm Permalink
First, they didn't say anything about aluminum as a major component and second, they de-emphasized that the Colorado will be FAR SMALLER than the full-sized trucks it won't be competing with.
devin wrote on March 14, 2014 - 7:19pm Permalink
First, the very first statement in the exerpt from GM's press release in YOUR article is that the Colorado will be smaller in size. Second, 2 lines after discussing the sized of the truck it says they will be using aluminum in the Colorado, so that discredits both of your points. Lastly, anybody that's been watching what's going on in the truck world the last 6 months knows that GM is going with a midsize truck strategy vs. Ford's aluminum bodied F150 onesize fits all strategy, which doesn't work for everyone, which is the. point I was trying to make.
Eric P. wrote on March 13, 2014 - 2:03am Permalink
Missleading? Kind of like labeling an artical that the big three are following Toyota Tundra's towing lead"! I will be buying the Colorado when it comes out plain and simple!
Aaron Turpen wrote on March 13, 2014 - 3:56pm Permalink
Wow, thanks for making sense and being on topic. Or not.
YeahBut wrote on March 13, 2014 - 6:16pm Permalink
GM could add 2 simple things to make this a great alternative to a full size, maybe they don't want it to be too good. 1. Option of 2 door plus toolbox cab and an 8' bed - that's a basic cab plus a short extension, around 10", no rear seat nor room for one. Much less weight and length than a cab with a back seat. The 8' bed makes it good for actual work or fleets. 2. V8 option. With a half ton less weight and cylinder decativation, a GM's new V8's would get good mileage while the V8 offers torque and longevity. Win and win, except GM fears cutting into full size sales. I'm sure it won't happen: it makes too much sense.
aackerk wrote on June 9, 2014 - 10:52am Permalink
Regardless of whether or not the new GMT700 trucks are slightly heavier than the Taco and Frontier, they will be getting significantly better fuel economy and tow ratings than them. In all honesty, it makes sense to compare the 700 twins to a full size truck for a couple of reasons. 1.) Those in the truck market are surely considering a full size truck as well, and 2.) The GMT700 is just as, or more capable than some of the full size counterparts. For example, the 3.6 V6 is rated to tow 7,000 lbs, that's 300 lb more than what GMs 1500 4.3 V6 trucks can tow, only 150 lb less than what the 3.6 Ram 1500 can tow, and only 300 lb less than a super crew EcoBoost F150. It's maximum payload capacity of 1500 lb is better than many of the full size Ford, Ram, and Tundra configurations. I could give more examples, but I think you get the point. Also, when the 2.8 Duramax hits the scene, it will make these trucks even more capable. 3.) Fuel economy will be better than both full size and mid-size competitors.