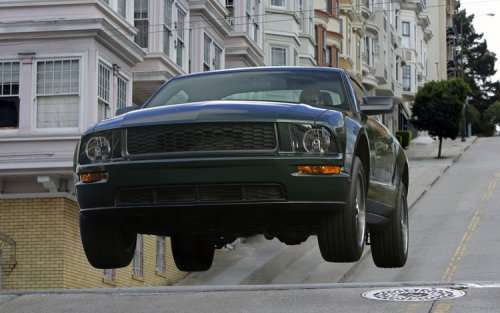 Is the Ford Mustang the most prolific movie car ever?

With nearly 3,000 appearance credits in movies and television, the Ford Mustang may be the most photogenic vehicle in the world.
Advertisement

With all of the news lately about the 2014 Ford Mustang being a star in the upcoming Need for Speed film (read more here), it's easy to forget that this iconic American muscle car has had not hundreds, but thousands of film and television appearances over its near fifty years of existence.

A few months after the new model line launched, the 1964 Ford Mustang appeared in Goldfinger alongside James Bond, played by Sean Connery. From that high-profile appearance, the car quickly became a go-to choice for Hollywood. From there, it appeared in many more movies and television shows.

One Mustang fan was so enamored with this that he began a database of Mustang movie and TV appearances, called Mustangimdb.com. Stefan Thorarensen, an Icelander, started the site in 2009 and has now amassed nearly 3,000 movie and television credits for the Ford muscle car. Thorarensen is not alone.

The go-to database for car and film fans is the imcdb (or Internet Movie Cars DataBase), whose Mustang entries number in the several hundreds.

And of course in Bullit, the most Mustang-driven of all movies and the film from which our article graphic hails.

The Ford Mustang is truly a star of film and screen, showing up as a preferred car of main characters like Matlock and as a favored retro car for Overhaulin'. Eleanor, the 1967 Mustang used in Gone in Sixty Seconds (2000 remake) was recently sold at auction for over a million dollars.

"With a résumé like that, Mustang may someday get its own star on the Hollywood Walk of Fame," a Ford press release half-smirks. Actually, maybe it could.