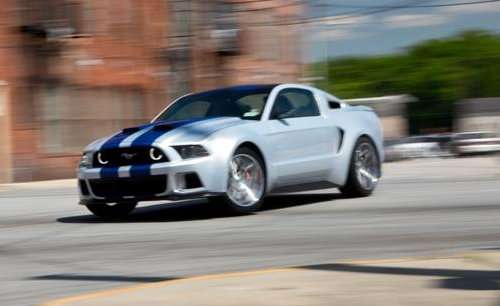 Unique Ford Mustang to be featured in Need for Speed movie

Ford Motor Company and DreamWorks Studios announced this morning that the Ford Mustang will be the featured “hero car” in the upcoming Need for Speed movie – a fast paced action flick based on the fabled Need for Speed video game series.
Advertisement

It has been known that DreamWorks Studios has been working with Electronic Arts to film a racing movie based on the legendary Need for Speed video game series and while we have been offered a list of the people starring in the movie, today’s announcement of the unique Ford Mustang offers us our first look at what kind of cars will be included in the movie. In all reality, I am far more interested in the cars than the actors and with the level of anticipation surrounding the Need for Speed movie; it comes as big news that the mighty Mustang will play such a big role.

“’Need for Speed’ is rooted in Americana, and when we were casting our hero car for the film, Ford Mustang was the obvious choice,” said Stacey Snider, Partner and Co-Chair of DreamWorks Studios. “With its 50-year history in film, the iconic Mustang is the perfect co-star for Aaron Paul. We are privileged to have such an esteemed partner like Ford working with us on this film and look forward to seeing their Mustang up on the big screen next year.”

The Ford Mustang that will be featured in DreamWorks’ Need for Speed will be based on the current
(2014) model year Mustang and based on the one piece of film artwork (shown above on the right), it will be based on the tried and true GT package. This unique Mustang begins with a unique wide body package that gives the car a wider, more race ready stance but unlike many wide body kits on the market (for all cars – not just the Mustang), this package preserves the natural look and feel of the 2014 Ford Mustang. Up front, a redesigned lower front fascia has a more aggressive feel with a large central air opening flanked by a pair of smaller yet still very large ducts that could serve to cool the brakes. Finally, the major appointments of the Need for Speed Mustang are capped off with a dual nostril hood that harkens back to the design from the 1971 Mustang Mach 1. This special Mustang will also feature unique 22 inch wheels to fill out the wide body kit and while it is not mentioned in the release – it also looks like the Need for Speed hero car will wear some other unique items such as a different rear spoiler and quarter window louvers. We would also guess that the rear fascia will be revised in some way to allow it to “fit” with the unique front fascia and the wider stance of this special Mustang.

In addition to the Need for Speed 2014 Ford Mustang shown above, Ford Motor Company provided DreamWorks with a specially equipped Mustang camera car that was used to capture high speed racing footage. This in-car or on-car footage should offer moviegoers an incredible close-up look at the illegal racing action that has made the Need for Speed gaming series so famous. Ford also provided the studio with an F450 truck for the filming but it is unclear whether that was used as a production vehicle or if the truck known as “The Beast” will be included in the movie itself.

“Ford Mustang is a symbol of freedom and optimism that allows you to be the person you dream of being, making it the perfect fit for this story,” said Jim Farley, Executive Vice President, Global Marketing, Sales and Service for Ford Motor Company. “Ford is excited to partner with DreamWorks and Electronic Arts as they bring the epic gaming franchise of ‘Need For Speed’ to the big screen, allowing us to go further with them as they tell their great story on the global stage.”

DreamWorks’ Need for Speed promises “hot cars, high-stakes street racing and mind-blowing stunts” – a description that leaves many people (including your humble narrator) if this will be a racing movie with a solid plot line or if this will simply be DreamWorks’ shot at stealing some of the attention garnered by the Fast and the Furious movie series. While the Fast and Furious movies have made a fortune over the past decade, the high flying driving stunts turned off many automotive enthusiasts due to their brutal lack of realism with a reputation that is much like that of the world of professional wrestling. Need for Speed will feature an impressive cast of characters including Aaron Paul from Breaking Bad, Dominic Cooper from Captain America, Imogen Poots from Fright Night and Michael Keaton. That’s right…Need for Speed will have Batman.

While visions of cars jumping from land onto a speeding yacht might bring in the kiddies who dream of someday owning an economy car with 500 horsepower, a solid plot with exciting yet somewhat realistic stunts could draw the attention of serious gearheads while also making the Need for Speed movie as popular as the long running video game series. We will find out when Need for Speed hits US theaters on March 14th 2014.