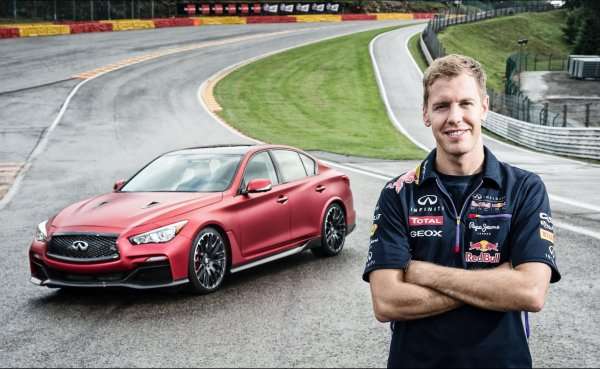 The Infiniti Q50 Eau Rouge has finally met the famous corner after which it was named. Courtesy of Sebastian Vettel.
Advertisement

The prototype "super-saloon" Infiniti Q50 Eau Rouge has finally met its namesake, the famous high-speed corner at the Spa-Francorchamps race circuit in Belgium. The Eau Rouge corner is known as the signature of the circuit, where drivers often make or break their entire race.

Since he would be there anyway, Vettel thought it would be fitting to finally introduce the car Infiniti named after the infamous corner to the track and corner itself. Although the weather wasn't cooperative for a good run in the car, with pouring rain marking the day, Vettel took the Q50 Eau Rouge out to the circuit anyway and drove it as hard as the weather permitted, coming around the Eau Rouge with a cheer.

“Even though it was difficult to get a proper feel for the car’s performance due to the wet track, the engineering team have made definite improvements to the car in the areas of steering and suspension since I first drove it earlier in the year,” said Vettel. “There is no shortage of power from the Q50 Eau Rouge.

"All in all it was an interesting day and we had fun. It was a privilege to be given the task of driving the Q50 Eau Rouge on one of the most demanding corners in the world.”

Infiniti still hasn't committed to building the car, but it's becoming clear that an Infiniti Q50 Eau Rouge is very likely to go to production. It's just a matter of when.