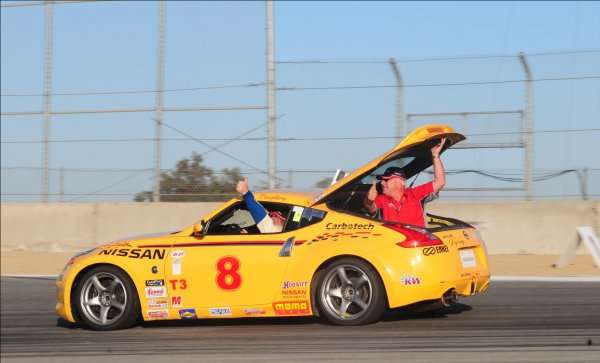 The Nissan team took its 96th and 97th victories at the 51st SCCA Runoffs at Laguna Seca, with the most exciting race between between Daughtery and his 370Z and Wickerhsam's Mustang. A show of sportsmanship also helped a newcomer win his race, showing racing not just about winning.
Advertisement

The Sports Car Club of America (SCCA) hosted the Laguna Seca runoffs this weekend and Nissan's own David Daughtery took part in not one, but two races in Nissan vehicles. The most exciting of those was the T3 category in which Daughtery drove his 370Z for a pole position and then followed that with a win after a head-to-head battle with Tom Wickersham in his Mustang.

The race was intense, with the two going back-and-forth throughout. The 370Z had the lead in the beginning, but lost grip early, allowing the Mustang to take the lead. The 370Z then came up and the two were side-by-side in a thrilling show of driver skill as both racers vied for the lead. Eventually, the Mustang held the inside and took the lead at a turn, but Daughtery in his 370Z stayed on his tail and kept up the pressure until eventually the Mustang driver lost it under the unrelenting push and went off track, giving the 370Z the clear lead. This was the 96th championship win for Nissan and a step closer towards national championships for the seven-time champ Daughtery.

Nissan took the top five spots in the GT3 category with three 240SX cars. The heavy competition in that category was almost entirely from Nissan itself with two three-time champs on the field. John Black in his 350Z was favored to take the podium as well, but a glitch in his 350Z's tachometer left him shifting by ear, pushing him behind to fourth. Ultimate, Collin Jackson took the top spot in the GT3 category, securing Nissan's 97th win.

Daughtery returned to the field and made the podium in the B-spec turn in the only Nissan Versa Note to take the field. He won a third place finish in this, just losing second to a Mini. The winner was, ultimately, Kyle Keenan (driving a Kia) who wasn't going to race at all as he didn't have the tires, but a rubber loan from Daughtery put him on the field for his first win.

"I'm just speechless. These tires let me compete for the win, and I can't thank Dave enough. He's the coolest competitor in the world," Keenan said.

"I've had 30-plus years in racing, and I couldn't do it without other people. He's like I was when I was young. I figured this would give him a better chance," Daughtery said.