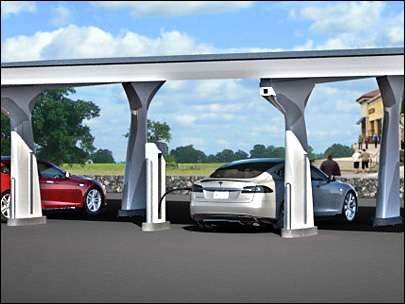 Now that we have had a couple of days to get over the grandeur of Tesla CEO Elon Musk's big plans for the future regarding the charging stations, let's look at the reality of the situation.
Advertisement

In signature fashion, Tesla Motors unveiled a huge, ambitious plan to build charging stations all over the country so that someone with a Model S could travel from one end of the country to the other without any road trip range anxiety whatsoever.

It was huge, it was grandiose, it was so.. Musk-ey.

Not that there's anything wrong with that. Musk is a huge figure, figuratively speaking, and has done some really awesome stuff that seems to have been pulled off purely by force of personality and determination. PayPal, the banking site that wasn't really a bank, Space X, the civilian space faring company that actually flies, and Tesla, the high-priced electric carmaker that somehow sells the cars it makes.. The guy is really good at pulling off the things other people laugh at.

Still, he's also a master of selling ideas. His presentation to the world to introduce the big, bold new charging station plans was big. Huge, even. It was star-studded, full of glam, and very entertaining. Yet it missed one very important point. One that most people who aren't electric vehicle geeks wouldn't have understood if it had been included, actually.

It's a little pesky thing called plug-in standards. You see, the world has pretty much chosen to use the SAE J1772 plug standard. At least, in regular, everyday, slow-to-charge cars they have. You cannot use the same plug that charges your Volt, Karma, or Leaf with a Tesla Roadster or Model S. They aren't the same and they use different connections. Tesla has a converter for use at public charging stations that allows their cars to work with a J1772 plug-in, but it only works at lower charge speeds and cars that use this plug as standard cannot use the new Tesla Charging Stations.

So what Musk forgot to mention during his grand gala presentation announcing the charging station network is that it will only work with Tesla-made vehicles. In other words, if you buy an electric car but it doesn't use Tesla's standard plug-in (patented, by the way), then you're S.O.L. using their network to drive freely across the nation. So if you can't afford a $60,000+ electric sedan..

To paraphrase the Soup Nazi.. NO CHARGE FOR YOU!

To compare this to what we're all used to, this would be like installing gas pumps that only allow a car with a filling port on the left side to use them. Worse, though, if the car's filling hole is not at least 2.87 inches wide, your spigot won't fit in it either.

On the other hand, this move by Tesla is much like how Apple took over the smart phone market. While Blackberry was the first readily-adopted smart phone, Apple came out with one that was prettier and had much better marketing. Even though it was expensive, could only be used with stuff they would sell you at a premium, and slower.. it had better salesmen and so it became the most prominent smart phone on the market while its competition slowly dies a cold death in Canada.

Oh, and another thing.. all that fast charging Elon was touting the other night? It plays hell with battery life expectancies. It's gonna suck when that expensive sedan becomes a brick a lot sooner than you'd expected..

Tesla Contemplates A New Strategy for China Retail even As Sales Boom
Jay Leno on Elon Musk & EVs: “I Think He Should Get ... Credit"
END_OF_DOCUMENT_TOKEN_TO_BE_REPLACED