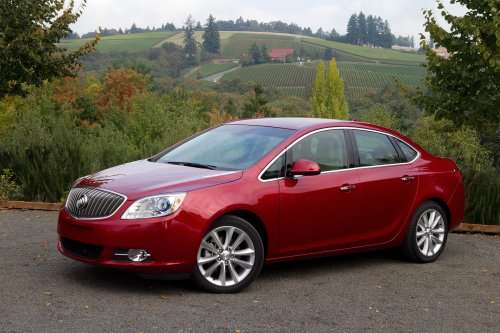 Buick has been going through a sort of identity crisis for years, becoming a car company whose propensity for being the butt of jokes has become legendary. With the Verano, however, Buick hopes to change all that by appealing to a younger, sexier crowd. Like the Donald.
Advertisement

Talk to any car person, be they a mechanic, someone in manufacturing, or an automotive journalist, and if the brand of Buick comes up, jokes will quickly follow. Like "rhymes with quick but ain't" or referencing other cars as "the Buick of.." (sports, performance, style). Love them or not, General Motors' "old people cruisers" brand has been hammed for years.

Now that restructuring is over with and the dust has largely settled, Buick is looking to re-invent itself. It's doing so by making the 2012 Verano its flagship.

The Verano is Buick's first entry into the compact luxury segment, or so says the Buick marketing materials, where it's competing against well-established players like the Lexus IS 250, BMW's 3-series, the Audi A4, etc. Interestingly, the Verano is priced about $10,000 less than the competition (opening MSRP at $23,470), putting it more in the Camry, Accord, and Sonata compact sedan segment.

The price point is more on par with reality. The 2012 Buick Verano is really a compact sedan and is not, despite the hype, anywhere near luxury levels in trim. Even at its highest trim level, it's more like a well-appointed Toyota Camry than it is a Lexus. That's a marketing faux pas on Buick's part, but it doesn't change the car itself, which by Buick standards, is pretty revolutionary.

Of course, we're talking about Buick, so "revolutionary" is in a different context than it would be were we talking about a company more known for envelope-pushing, competitive design prowess. Think of it as revolutionary in a comfortable middle-class, gated community sense, not in a "just got outta da hood and goin to college" sense. On those terms, the Verano's revolution is pretty intense.

As GM's nom de plume, Buick has always harnessed the power of appealing to people who don't want anything weird in or on their cars. Big, comfy, and in muted colors has been the Buick ideal for decades. For Generation X, it's always been this way. We don't remember Buick being any different. It was the car that grandma and grandpa drove because they couldn't afford a Cadillac or Lincoln and it was the car that got handed down to you or your siblings because the family couldn't afford a used car of any interest and perhaps refused to buy foreign.

The Verano, however, is bucking that trend and (sedately) crying "fist in the air!" It's now starred in its own quasi-reality TV show, in fact, courtesy of Donald Trump. It recently won out against other celebrities on the show, all persons of Gen X appeal. How sweet the irony that much of the cast for Celebrity Apprentice heard the famous Trump proclamation "You're fired!" after failing to produce a 2012 Buick Verano marketing campaign that The Donald could approve of. Even more ironic: the fired cast included Adam Corolla, which in effect had Trump telling the Verano's main competition to go home. Also fired were race legend Michael "Mario" Andretti of CART and Indy fame.

The special 2-hour episode of Celebrity Apprentice was star-studded, with actors like Lou Ferrigno, Pen Jillette, Arsenio Hall, Paul Teutul Sr, and Miss Universe 2008 Dayana Mendoza. During the show, which was like a 2 hour commercial for the Verano, Buick also debuted two new TV spots for the car, highlighting two of the car's big selling points: its IntelliLink infotainment system and its QuietTuning technology, a feature which shows Buick isn't straying too far away from its roots.

Celebrity Apprentice itself is demographic'd heavily in the Generation X market. So putting the 2012 Verano on that show was a clear (and brilliant) move by Buick. Will the Verano sell to Xers? Hard to tell, but the car's popularity in terms of GM-reported sales figures is climbing, getting up to 1,688 units in February compared to 265 in its debut month of December.

Now for the real question: is Generation X becoming the new "old people demographic?" For answers to that, we'll have to turn to our generation's favorite tool: the Interweb. So, users of Al Gore's invention, what do you think? Are we old?