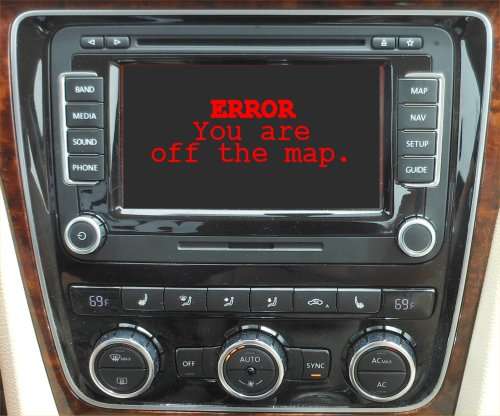 Blips in the GPS radar - how useful is that nav system, really?

The navigation system is becoming one of those expected amenities in our cars today - one of those things we assume will be there when we buy a new car, along with the electric windows and air conditioning. But is this "high-tech option" here to stay like the others have been?
Advertisement

One of the great benefits of the glamorous life of automotive reporting is that we get to drive a lot of different cars and they're almost always given to us in their top-trim level, which includes things like telescoping steering wheels, sunroofs, and, of course, satellite GPS navigation. But is that GPS really necessary or even useful?

Like many premium options before it, the navigation system is becoming an expected accessory in today's automobile. Not long ago, air conditioning was a high-dollar option, not an expected inclusion. As was cruise control, power door locks and windows, a stereo system, and more. Like our homes around us, our cars are getting more and more complex as what was once a high-falutin option has now become a common expectation of the masses.

The GPS navigation system is getting to be the same way. Although it's still generally sold as an option in most non-luxury vehicles, the nav system is often bundled with other common (and expected) options like touch screens and satellite radio. It's so common to see a GPS system built-in to a car now, in fact, that most people don't see it as special anymore. It's just another convenience.

Recently, fellow Torque News contributor John Goreham sent me a story from Massachusetts about a lady whose navigation system turned her horribly wrong. According to her, it instructed her to drive on the trolley tracks where she eventually high-centered her vehicle and got stuck - in a potentially dangerous position. (Read the story here). Is she making up a story to cover for her own incompetence? Possibly, but given my experience with in-car GPS systems, I'd say her story is legitimate.

In the town where I live, there aren't exactly a lot of people, traffic is non-existent, and finding your way around is as simple as knowing what compass direction you're facing. Still, I have a little routine I go through with every new test vehicle I get when trying out the navigation system. I park at a specific spot in town - next to a landmark, the town park - at the same location, facing the same direction. I then key in a friend's home address that is about two miles away. Only rarely does the nav system give me direct-to-the-target directions. Usually, it steers me all over town in a quest to find one of the three "major streets" (meaning "Main", "Market" and "Highway 30.") before pointing me towards their home. Often with deviations of more than a mile off course. Yet Google Maps on my phone has no problem telling me exactly how to get there.

There are other problems with most in-car GPS systems (whether built in or after market). One of those is illustrated in a recent story from Muncie, Indiana where a business owner has been struggling to get his address changed in common GPS systems for years. Not because he moved, but because the city changed the name of his street several years ago. (Read about that here.)

That Indiana business owner faces a common plight: during the craze of changing street names to honor Dr. Martin Luther King in the 1990s, many streets were only partially updated to the name (meaning just a portion of it was named MLK Blvd or similar) or name changes were not picked up by larger mapping companies. This leads to a lot of confusion and can get even worse when modifications are made to existing roads that change address numbers along the route - another change often not logged in updates for mapping systems.

On a recent visit to Denver, Colorado, I saw this problem in action as the nav system in the car I was driving informed me that I should turn on a street that no longer existed. Physically, it was still there, but while the map gave it one name, the street signs had another, so there was no indication which street I was to use. The nav system had to try to compensate when I passed the proper road and I ended up in, let's just say a less-than-desirable neighborhood after dark. I rolled up my windows and hurried out of there.

With the proliferation of GPS-capable smart phones and the long lag between street-level changes and updates to current software-dependent GPS systems, one has to question how long these gadgets will be in our cars. The industry has already made forward-looking glances at ideas like phone-based in-car systems that are dependent on easily-updated apps on your smart phone rather than on the car's internal electronics. Already, we can use our smart phone to play music from Pandora, pull Internet-based maps or navigation, etc. Our phones all have apps that can be added to give turn-by-turn directions and find points of interest just like the in-car GPS does. It seems only a matter of time before the in-car GPS navigation system gives way to a gadget-based GPS nav instead.

Once that happens, perhaps the problems we've seen like driving on trolley tracks and not having your business listed in GPS will become things of the past. After all, Google's satellite imagery of my town is only two years off and we're awful podunk compared to Brookline and Muncie.

Darren Griffin wrote on August 23, 2012 - 3:51am Permalink
Let's not follow the trend of blaming the satnav. If a driver blindly follows guidance and ends up in the sea, on a railroad track or driving the wrong way down a one way street then blame lies with the driver. Satnav is a guide, not an autopilot.
Aaron Turpen wrote on August 23, 2012 - 1:04pm Permalink
So.. if I'm in unfamiliar territory and using my satellite navigation system and it says the trolley lines are a roadway (they often look like one), then I'm supposed to magically just know that they aren't? How about street names that are incorrect? Mislabeled one-ways? The point is, GPS and navigation maps for these systems are often wrong. Sure, if the driver is dumb enough to drive off a cliff into the ocean, that driver can't blame their nav system, but that's a SHTF scenario, not an everyday one.
Jim Dexter wrote on August 23, 2012 - 2:41pm Permalink
Both the GPS and Mirror Compass on my 2012 Hyundai Sonata Hybrid are very inaccurate. The GPS is terrible for finding exact addresses. The compass tells me I'm driving SW when I'm driving straight W or NW when I'm driving straight north. The dealer, Riverton Hyundai, refuses to address the problem.
Aaron Turpen wrote on August 23, 2012 - 7:17pm Permalink
I have a simple magnetic ball floating in water as a compass and it's worked great for my driving needs for years. Of course, your problem could stem from the earth's magnetic poles shifting. :D Maybe it's happening faster in Korea.