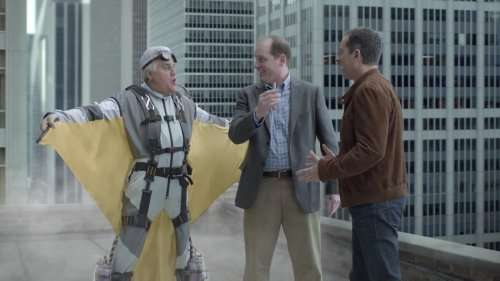 Of all of the automotive commercials run during the nation's biggest game of the year, the Acura NSX commercial featuring Jerry Seinfeld and Jay Leno got the most attention.
Advertisement

It appears the title of my article Acura NSX Blitzing the Super Bowl was quite the prognostication as the commercial did, in fact, become the most attention-grabbing of all of the automotive commercials during the big game. According to data from Google, AutoTrader.com, and TorqueNews.com, the car received the most Web-based interest from people over any other during game day.

Using Google Insight, we can see that during the lead-up to, the day of, and the day after the Super Bowl on Sunday, searches for terms such as "Acura NSX," "Acura NSX 2012" and "NSX" were all significantly higher than similar terms from competing advertising such as "Honda CR-V" and "CRV" (referencing the Matthew Broderick commercial).

AutoTrader.com reports similar results for search patterns on their site. Their analysis shows that searches during the game were up 1,800% compared to the next runner-up, the Toyota Camry, at 370%.

Here at TorqueNews.com, articles related to the Acura NSX during game day were also heavily trafficked on game day. The article referenced above, in fact, as well as other articles referencing the NSX accounted for nearly 65% of site visitors on Sunday.

So what makes the Acura NSX ad so much more compelling to those who saw it than the others aired during the game? It could be a lot of things, but likely it's the multi-faceted creativity and star power the ad employs. The ad, titled Transactions, is only peripherally about the car itself and focuses instead on Jerry Seinfeld's humor in a goofy situation with a final plot twist in which Jay Leno steals the show (or, at least, Jerry's chance of getting the first NSX off the line).

Other ads, such as the whimsical and nostalgic Honda CR-V ad Matthew's Day Off mentioned above, and the controversial It's Halftime in America Chrysler commercial with Clint Eastwood, came at audiences from very different angles. While they were good ads, they were not the blockbusters that Acura scored with its spot.

Other intangibles, such as when the ad aired during the game and the fact that our measurements here are only gauging Internet-based response to the ad (a good metric, but not all-inclusive), also play a role here.

Mostly it seems to be about consumer appeal. The ads were all well made, but the Acura NSX spot incorporated a sort of James Bond sex appeal (really cool car), star power (Seinfeld and Leno), humor, wackiness (Seinfeld with sock puppets!), and a touch of intelligent surprise (plot twist). In two minutes, a full story is told.

Regardless, it was a banner year for automotive Super Bowl appearances.

Anonymous wrote on February 10, 2012 - 10:47am Permalink
No way star power had anything to do with people looking this up on the web. The fleeting shot of the car that looks futuristic, immediately made people want to a) find out when and how much this car would cost b) get a better look at this nice looking futuristic style I tried looking it up right after it aired on TV and the first page of Google results, pages came back with page could not be displayed from the high activity of searchers such as myself wanting to find out more about the car. I like Seinfeld, but could care less that he and Leno were in the commercial.

Tesla Giga Berlin's New Hurdle: It's Not Only the Gov't, but Now Tesla Itself
Teslas Are Sold Out Until 2023, But The Timing May Reverse
END_OF_DOCUMENT_TOKEN_TO_BE_REPLACED