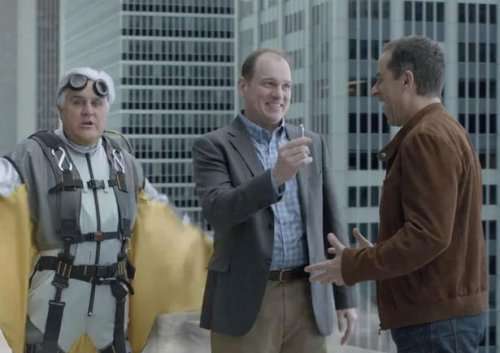 Acura has unveiled its Super Bowl ad for the Super Bowl this weekend, featuring Jerry Seinfeld and Jay Leno in two minutes of humor.
Advertisement

What do Jerry Seinfeld and Jay Leno have in common outside of comedy and gray hair? They both want to be the first customer to get an Acura NSX. At least, according to Acura's new commercial featuring the two superstar comedians, that's how it is. The extravagant 2 minute ad features the two while the car itself gets only a few seconds of screen time. Of course, it's a Super Bowl ad, so it's either got to feature Britney Spears and a lot of dancing or wackiness that may or may not reference the product being sold. Spears was booked, so they went with option B.

Good choice, it turns out. The commercial, titled Transactions, pits Seinfeld against lucky Customer #1 who gets the first Acura NSX to roll off the line. Hoping to win him over and buy the privilege, Seinfeld offers nutty item after item in an ever-growing list of far-fetched buyouts. He ultimately wins him over only to be thwarted by arch rival Leno, whose name he repeats in the signature "Newman" line from the long-running, hit TV series bearing Jerry's name.

During the epic battle between the New York Giants and the New England Patriots, the commercial (embedded below) will air alongside some of the most anticipated and extravagant commercials of the U.S. broadcast season. Price tags per minute are uncertain, but the two minute run for this bit of comedy involving a car is likely in the tens of millions.

The NSX was first leaked as a 2013 model plan, but that has since changed to 2015, but the car will feature Honda's new V6 mid-mount engine coupled with their Super Hybrid All-Wheel Drive system. It will be made in America as well at Honda-Acura's plant in Ohio. TorqueNews caught exclusive photos of the Acura NSX at the Detroit Auto Show, which you can see here.

Given his love for new cars and concepts, Leno (who just took delivery of a Chevy Volt), will likely be in line to get an NSX as well. Seinfeld? Well, he'll just have to settle for being Customer #2: