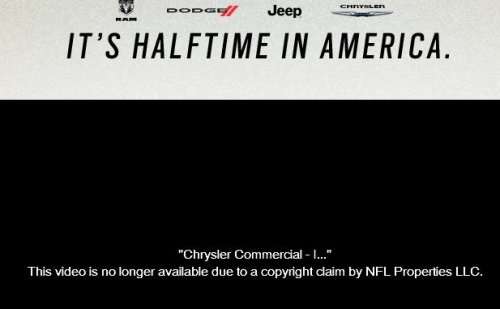 The commercials that run during the Super Bowl have become almost as big of an attraction for some as the game itself and during last night’s Super Bowl 46 – Chrysler’s 2 minute long advertisement titled “It’s Halftime in America” featuring Clint Eastwood was among the big winners but it seems that the hard-hitting piece has spurred some controversy courtesy of the legal staff with the NFL.
Advertisement

This is the second year in a row that the Chrysler Group has been responsible for the longest commercial during the Super Bowl, with this year’s 2-minute piece featuring Clint Eastwood followed up last year’s 2-minute long “Imported from Detroit” commercial which featured Detroit native/hip hip superstar Eminem. Last year’s ad focused on the rebirth of the Detroit area as the Chrysler Group went through a resurrection of its own but this year, Chrysler related their struggles to those of the entire United States. Chrysler’s downturn of 2008 came alongside the “great recession” and like the Chrysler Group has done since the takeover by Fiat SpA, the US economy has rebounded and things have slowly improved for many.

Chrysler’s “It’s Halftime in America” bit ran just as halftime of Super Bowl 46 began and while the ad didn’t really feature any Chrysler Group vehicles other than quick glimpses here and there as Eastwood talked, the monologue by the gnarled American actor was powerful and moving. The commercial didn’t even actually mention the Chrysler Group and Eastwood’s piece could have been superimposed into almost any commercial but in a list of Super Bowl ads that feature drunk guys having fun, talking animal characters and half naked women – Chrysler’s uber serious 2-minute spot commanded attention of viewers. For those who didn’t watch the game, below you will find the video courtesy of Chrysler as well as the script of Clint Eastwood’s monologue during the commercial.

One of the keys to the success of any Super Bowl ad is the popularity and interest that it generates after the game and last year, Chrysler’s ad featuring rapper Eminem was quick to spread around the social networks with YouTube offering a wide variety of sources showing the commercial. However, it looks as though the NFL is working hard to make sure that doesn’t happen with this year’s Chrysler Super Bowl ad. Since the advertisement aired last night during while preparations were being made for the big halftime show, NFL legal crews have been running around the internet – forcing sources like YouTube to remove the commercial from their websites. In fact, as this article is being published even the official Chrysler channel on YouTube, which features the title of this new commercial in bold print across the top of the page (image shown on the right), does not actually have the commercial for viewing. When you click the play button you receive the message “This video is no longer available due to a copyright claim by NFL Properties LLC.” This might just be an error of some sort but right now, it looks like the kind of thing that could create a bit of a fuss between the NFL and the Chrysler Group as the National Football League’s legal staff is preventing Chrysler from showing off their high priced Super Bowl ad on the world’s largest video site. If nothing else, it sure doesn’t look like the NFL cares much about working smoothly with those companies who spend millions of dollars to advertise during the Super Bowl. The main issue is that right now, the NFL is preventing this new advertisement from obtaining the massive internet following that makes these ads so successful. Super Bowl ads have really become more about “going viral” the day after the big game than they are about attracting attention during the game and as things stand right now – the NFL is working to make sure that doesn’t happen.

Finally, a great many of you are probably wondering just how much it cost the Chrysler Group to snag 2 full minutes of commercial time during Super Bowl 46. An exact dollar figure has not been announced and it likely will not be since the Chrysler Group is no longer controlled by the US government but ESPN has stated that on average, a 30 second spot during the Super Bowl cost around $3.5 million. Based on that number, a 2-minute commercial could have cost in the area of $14 million although you have to wonder if halftime commercial slots cost a little less due to the fact that some people switch off during halftime – perhaps to avoid seeing a 60 year old Madonna dancing around the stage in a tiny outfit.

Luckily, the folks at the Chrysler Group have offered up an embed link that works (at least for now) so below, you can check out the new commercial featuring Clint Eastwood that ran during last night’s Super Bowl 46.
The script from Clint Eastwood’s monologue:
It’s halftime. Both teams are in their locker room discussing what they can do to win this game in the second half.
It’s halftime in America, too. People are out of work and they’re hurting. And they’re all wondering what they’re going to do to make a comeback. And we’re all scared, because this isn’t a game.

The people of Detroit know a little something about this. They almost lost everything. But we all pulled together, now Motor City is fighting again.

I’ve seen a lot of tough eras, a lot of downturns in my life. And, times when we didn’t understand each other. It seems like we’ve lost our heart at times. When the fog of division, discord, and blame made it hard to see what lies ahead.
But after those trials, we all rallied around what was right, and acted as one. Because that’s what we do. We find a way through tough times, and if we can’t find a way, then we’ll make one.

Detroit’s showing us it can be done. And, what’s true about them is true about all of us.

This country can’t be knocked out with one punch. We get right back up again and when we do the world is going to hear the roar of our engines. Yeah, it’s halftime America. And, our second half is about to begin.

Aaron Turpen wrote on February 6, 2012 - 8:42pm Permalink
I fail to see what kind of problem the NFL could have with this ad, nor can I see how they can make any ownership claims over it unless they paid for its production, paid for its air time, or own Clint Eastwood's image.
Anonymous wrote on February 7, 2012 - 3:28pm Permalink
I think its a commentary on our American people. The NFL should worry about the games and not who watches the commercials after the game for which their customers, by the way, paid a great deal for. Often times the commercials are of more interest than the game! It amounts to censorship.