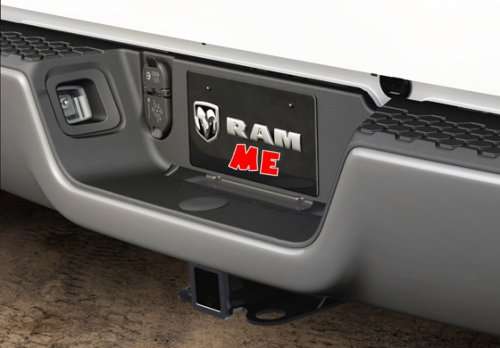 Pickup trucks are as American as apple pie and hot dogs. They comprise one of the largest vehicle markets in the nation, which means they are often the focus of innovation – for good or ill. Here are eight options offered in pickups trucks that are.. well.. questionable.
Advertisement

Love 'em or hate 'em, Americans love their pickup trucks. Some need them for work, some just want to have one for pleasure, and others just think they look cool driving one. Whatever your reason for owning one, they're big business in the Land of the Free.

That means they get a lot of attention from auto manufacturers intent on making theirs appear to be a cut above the rest. Options are usually where it's at with new vehicles and trucks are no different. Sometimes, the idea is a good one. Sometimes, it ain't. Here are eight epic failures in truck options recently offered by manufacturers.

#8 Auto-Only
Pickups are about the tough guy image. The need to be able to haul heavy stuff and drive through interesting terrain. They're about power and strength. They're the everyday man's version of a big rig on the highway. But good luck finding one that comes in a manual transmission.

For several years, most manufacturers have ceased offering manual transmissions as an option in their pickups. Nearly all full-size trucks are automatic by default - despite the fact that a manual gearshift usually means better gearing ratios for more power in many situations.

#7 Bed Liner Not Standard
Anyone who uses a pickup truck for what it's for knows that having some kind of bed liner (be it the cheap plastic type or spray-on protection) is a must. Most truck owners that don't have a bed liner and use their trucks like real men find out in about three seconds why they should have added this option.

#6 Diesel Only for the Big Boys?
Looking for a more fuel efficient, more powerful diesel option but in a smaller truck? Good luck. You won't find it anytime soon. Mahindra was trying to bring a compact truck here that had a diesel engine under the hood, but the red tape was too thick. Ford has suggested it might try doing it.. some day. So far, nothin' doin'.

#5 Aesthetic and Special Edition Packages
What could possibly say “pretty boy poseur in a truck” more than having a special edition package with interior treatments worthy of a Bentley? Not much. From Platinum editions to Longhorn options, these are everywhere and all of the makers have them. They include plush seating, specialized color schemes, prettied up dashboards, and more. All at the price of a bed camper or useful trailer. Nothing says “I own a truck because I'm a dweeb” more than these special edition options. The only exception might be Ram's Lone Star package, since we all know that if you live in Texas, you have to let the world know it.

#4 Front-view Cameras
Really? What's the point of this narcissistic idea? Are you really thinking you're going to meet up with Toby Keith and happen to have a chance to record his blockbuster ad-hoc performance via your truck's front-facing camera? Do you run into AFV moments often enough that having the ability to record via the comfort of your cab is important enough to have this as an option? Didn't think so.

#3 Interior-view Camera
Speaking of narcissism, what about the interior cam option? What the hell is this for? Are you so full of YouTube moments that you seriously need this kind of driving distraction built into your rig? Is your commentary on farm life so poignant that you need an easy way to record it as you sit in traffic commuting to your desk job from suburbia? Get over yourself.

#2 Food Holder
At first, this strikes me as a good idea. Then the logic kicks in. Eating while driving is not generally a good idea for obvious safety reasons. Yet someone had the great idea that adding this option would make you safer. This despite the fact that it very obviously encourages eating while driving. One manufacturer at least had the good humor to call it the Food Assist Replacement Tray.

#1 Built-in Trucker's Helper
If you've seen the plastic bottles of “apple juice” lying on the side of the road, then you're familiar with the Trucker's Helper. When a driver's gotta go, he's gotta go. Right? Well, pickup drivers aren't any different, according to one company. This is a center console option that.. uhh.. well, serves as a sort of port-a-potty for the desperate. It's made of a space-age polymer that's dishwasher safe. Assuming you are willing to put your potty into the dishwasher with the plates you eat off of. Maybe they figure a real cowboy wouldn't care.

Vanakatherock wrote on May 13, 2012 - 10:24pm Permalink
I'll have to disagree on a few of the "stupid options." As we've seen in modern sports cars, automatic transmissions tend to manage power better than using a manual transmission. The modern automatic can shift at the most appropriate time to help manage fuel efficiency better. Ford's TorqShift and the Allison auto's in GM trucks both can put the power down equally, if not better, than a manual transmission today. You know they've started figuring it out if they're offering auto transmissions in semi's, where shifting is a form of art. Though I do agree that offering only an auto transmission isn't good, we aren't reading the orders that come through that show what the auto/manual ratio was that lead to getting rid of the manual transmission all together. Bed-liner not being standard. Yeah, it's not okay to argue for trucks to seem "manly" then argue for bed-liners to protect the paint of what should be a work truck used as a work truck by a working man/woman, who plans on running the truck until the wheels fall off. And as far as the "Special Edition" packages go. Were you aware that the F-Series truck is quite popular amongst the wealthy in the United States? A combination of versatility and luxury helps trucks today to remain more popular than SUV's, regardless of gas prices.
Aaron Turpen wrote on May 13, 2012 - 11:46pm Permalink
Since you can't seem to understand humor, I'll play along with your seriousness. I live in rural America where people who own pickup trucks own them because they use them as both work and everyday vehicles. Anyone whose driven trucks (including semi trucks, which I have) knows that while "technically" the auto trans is better at distributing power, in reality, it isn't. Power is a combination of optimum RPM producing optimum torque for the situation you need it for. Try pulling a stuck boat trailer out of the lake without forcing low gears in your auto trans. You'll just spin your tires as it shifts and shifts and shifts away with your revs. Do the same with a horse trailer stuck in the mire, a Bobcat onto which a barn has collapsed... As for semi-trucks, you do realize that the real reason they're going to auto transmissions now is because of weight reductions in the transmissions and the rookie-friendliness (and thus cost-effectiveness) of the auto trans over manual; not because of some kind of "it's better for hauling" reason. Right? You see, putting an automatic transmission in a big rig 20 years ago meant adding roughly a ton of weight to the truck. Weight = money in trucking. It's for those same weight reasons that trucks don't have the synchromesh your car's manual transmission might have - hence the double clutch in a rig. As for luxury "rich people" buyers.. my point stands. BTW, many of those "wealthy" are farm/ranch owners whose wealth is offset by high costs of doing business. Just because their income is in the hundreds of thousands doesn't mean their profits are. Same with owner-operator truckers, who might make $200,000 a year, but only keep $60,000 of it. Again, if you don't NEED the truck, you're a poseur if you get one - especially if you treat it like some kind of limousine with a cargo bed. Same with sports cars, SUVs, and anything else. My family owns cars that make sense for our family: a small, fuel efficient Honda and a family-friendly minivan. My pickup truck, when it's running (it's old), is used to haul hay and miscellaneous items. It's a no-frills, manual transmission, 4WD pickup, not a daily commuter car.
Vanakatherock wrote on May 14, 2012 - 7:35am Permalink
Yes, actually, I do understand humor. But you seem overly defensive on a story on which you obviously hoped no one would challenge your "stupid options" on. I know how automatic transmissions work, even in the nastiest conditions. I worked with a grading and paving company for three years, all of our trucks were Ford F-250 crew cabs with automatic transmissions. We were responsible for hauling the skid steer (bobcats) to the job site when we needed them. What do you do, in a 2WD crew cab long bed truck, when pulling a skid steer into a muddy job site and start spinning, with an automatic transmission? You shift into lower gears, that's why the ability exists, to not make you look foolish, like the clowns with auto-transmissions doing burnouts on youtube where the car shifts low and high the entire time. The entire point of the newer automatic transmissions is that they are more effective at finding the peak torque range, when needed, to help you get out of those sticky situations. It seems to me that you're just content on calling people poseur's for simply owning and driving something they desire to have, even if they don't have an everyday legitimate use for it. I also assume that means I was a poseur a few years ago when I owned a 1996 Ford Ranger Extended Cab as a daily driver, because I could afford it and it got me from point A to point B with great fuel economy, right? And by your standards, I'm a poseur now because I own a 2011 Ford Focus sedan in which I rarely carry more than one other person in the vehicle at any given time. Obviously, the only time people aren't poseur's for driving a vehicle bigger than our need is when we actually fill the back seat up with more people or fill the bed up with more stuff on a daily basis. Your opinion is your opinion and my opinion is mine. Obviously we'll agree to disagree, but try not to be insulted when someone challenges your opinion laden article next time, okay?
Aaron Turpen wrote on May 14, 2012 - 9:35am Permalink
If overly defensive means explaining the facts to you, then I guess that's what I am. Thanks.