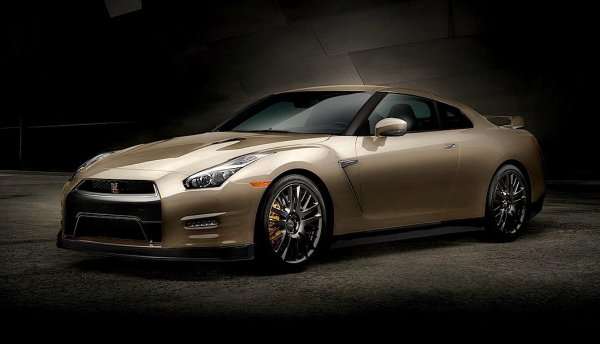 The Godzilla supercar is staying firm with its price tag, but adding some fun goodies including a 45th Anniversary Gold Edition and, perhaps more importantly, even more horsepower. The 2016 GT-R may be the last model year before redesign as well.
Advertisement

The 2016 Nissan GT-R just entered showrooms and is now available at select dealerships nationally. Pricing has been announced and holds over from the 2015 model year. New additions, however, give more horsepower to the GT-R Premium and Black Edition and a new 45th Anniversary Gold Edition has also been added. The NISMO is also rocking the high end of the car's performance, of course.

Pricing is at $101,770 for the 2016 GT-R Premium while the 2016 GT-R Black Edition is still $111,510 and the 2016 GT-R NISMO is still $149,990. Destination charges not included. For that jang, though, you get to add five more horses to the Premium and Black Edition cars, boosting them to 550 horsepower, thanks to added electronics tuning in the engine controls. The NISMO holds its massive 600 horsepower rating and NISMO-tuned aerodynamics and body reinforcements.

The new 45th Anniversary Gold Edition is based on the GT-R Premium model and commemorates the GT-R's heritage of world-class performance. A special gold paint color and gold-tone VIN plate in the engine compartment set off this car. A commemorative plate on the center console also showcases its limited edition status. The paint color is actually Silica Brass, which comes from the 2001 Skyline GT-R M-Spec R34. Only 30 of these 45th Anniversary Gold Edition GT-Rs will be sold in the United States.

Speaking of exclusivity, the 2016 Nissan GT-R NISMO edition will also be limited in sales for the new model year. Just as it was before. It continues to feature the VR38DETT 3.8-liter twin turbo V6 at 600 horsepower and 481 lb-ft of torque. The turbochargers used in the NISMO edition are taken from GT3 racing and electronics optimize ignition timing control for each cylinder while a higher-output fuel pump improves combustion with better fuel pressure regulation.

A big part of the Nissan GT-R's success has been its unique mid-ship configuration with the engine up front and the transmission and transfer case at the rear. This optimizes weight distribution and handling. In premium editions of the GT-R, switches for setting transmission response, shock absorber dampening, etc. allow customization for road or track.

Tesla Contemplates A New Strategy for China Retail even As Sales Boom
Jay Leno on Elon Musk & EVs: “I Think He Should Get ... Credit"
END_OF_DOCUMENT_TOKEN_TO_BE_REPLACED