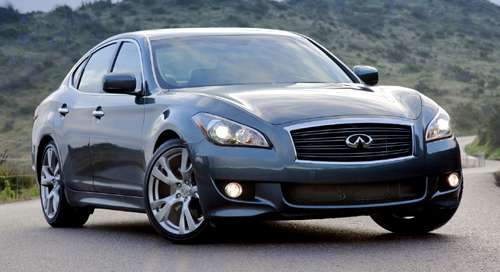 The previous generation Infiniti M56 was always a likable luxury performance sedan. It had a sense of oomph to it while providing a luxurious, comfortable ride. The one thing it lacked was a real sense of design but not so with the 2012 Infiniti M56. Gone is the bland exterior that was not in keeping with the rest of Infiniti's sharp looks.
Advertisement

The Infiniti M56 that underwent a complete redesign for the 2011 model year. [The 2012 M56 loaned to me for review by Infiniti is largely unchanged.] The new M56 (and M35, which has a smaller, 3.5-liter V-6 engine) has been given more aggressive dimensions and a sportier appearance. One no longer fails to notice the M56 when it's on the road. Before it was a candidate for Witness Protection because it was that bland.

There was little to complain about the previous generation M56's interior but Infiniti has succeeded in improving that as well. The new M maintains the roomy cabin of its predecessor while providing a longer, lower and wider shape. The M wheelbase is unchanged at 114.2 inches, but the width has been increased by 1.5 inches (to 72.6 inches), the length increased by 0.6-inch (to 194.7 inches) and the overall height lowered by 0.3-inch (to 59.1 inches).

The Infiniti M56 gets some credit for decent fuel economy numbers at 16 mpg city and 24 mpg highway from its 5.6-liter V8 with advanced VVEL (Variable Valve Event and Lift) system, standard 7-speed automatic transmission and direct injection gasoline technology. In a week of mostly highway driving, my numbers hovered are 23 mpg.

It's the M Hybrid that intrigues me, though. It sounds like a true competitor to luxury hybrids like the Mercedes S hybrid and the Lexus LS 600h. The 2012 Infiniti Hybrid is powered by the Infiniti Direct Response Hybrid System. It offers more than 350 horsepower (360 net horsepower) with estimated fuel economy of 27 mpg city and 32 mpg highway, with combined fuel economy rated at 29 mpg. That's great fuel economy for that kind of power.

One thing always associated with Infiniti is superb driving technology. Among the included technological features most intriguing are:

It's this last feature that is going to do more to save lives than practically any other feature on the car. The best accident is the one you never have. The blind spot intervention is going to help distracted drivers stay put. Sure, there's something to be said for the thinning of the herd by eliminating bad drivers but unfortunately bad drivers sometimes take good, innocent drivers with them.

All this technology, performance and luxury add up to a vehicle that is superbly pleasurable to drive. It's the kind of car that you invent reasons to drive. It was a sad moment when it had to depart my driveway for a different vehicle. It's a sedan I could enjoy piloting for years to come.

The M56 starts at $59,100 with a delivery charge of $875 for a starting price of $59,985. The model reviewed had the optional technology package that included the blind spot intervention and intelligent cruise control, among other items, for an additional $3000; the deluxe touring package with things like Japanese white ash wood trim, 5.1 channel, 16 speaker Bose system, and suede-like headliner among other options for another $3000 and 18-inch aluminum, alloy wheels for $650. The bottom line is $67,425.

That's not in my budget but if the Infiniti M56 is, put it on your shopping list. You won't be disappointed in a test drive.