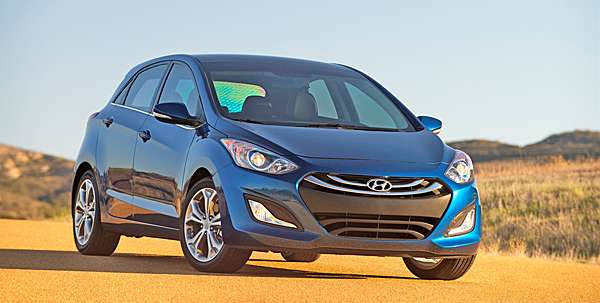 So, the auto buff magazine known as Motor Trend has pegged two Hyundai models – the Hyundai Veloster R Spec and the Hyundai Hyundai Elantra Sport – as two of the worst cars at the Los Angeles Auto Show currently underway and they couldn't be more wrong.
Advertisement

In my opinion, Motor Trend couldn't be more off the mark. It seems as if Motor Trend might be targeting Hyundai because the Korean manufacturer has never been named a Motor Trend Car of the Year, an honor typically awarded to the highest bidder for advertising, at least according to some rumors.

Motor Trend writer Chris Clonts hates the Hyundai Veloster R Spec for two reasons: Hyundai deleted other, desirable features of the Veloster, like auto-up windows, electroluminescent gauges and push-button start, in an effort to drop the price by $1000 vs. the regular Veloster Turbo. The second problem: Even with the turbo engine, the Veloster is a tepid performer."

OK, at more than 200 horsepower, the Veloster is not tepid. Maybe the folks at Motor Trend are used to driving high performance vehicles but even an idiot knows that 201 horsepower in a compact hatch is more than enough for a car of this size. Not every car is a Porsche 911 but Motor Trend seems to have forgotten most of its readers can't afford a car of that MSRP.

Also, Clonts complains because the Veloster has had some features cut that have little to do with racing, which the R Spec is designed to do. Who needs auto power-up windows and push-button start on the track? Apparently Motor Trend does.

When it comes to the Hyundai Elantra Sport (maybe Motor Trend hates anything having to do with cheap sports performance cars), Jason Udy writes, "While there were no truly terrible cars this year, the 2014 Hyundai Elantra Sport and 2014 Hyundai Veloster R-Spec underwhelmed. The Elantra Sport’s new 173-hp 2.0-liter I-4 only matches the existing Kia Forte EX sedan’s power and falls short of the 184-hp 2014 Mazda3 2.5 and the 201-hp Honda Civic Si."

But Hyundai claims, "This powertrain in the Elantra GT produces 173 horsepower available at 6,500 rpm and 154 lb.-ft. of torque on tap at 4,700 rpm. With these gains along with a low curb weight, Elantra GT can now boast the best power-to-weight ratio and specific output in the segment. Furthermore, Elantra GT now produces more horsepower than the Subaru Impreza, Ford Focus, Mazda3 five-door and Volkswagen Golf five-door."

So, who's telling the truth about the Mazda? Hyundai is. Motor Trend is. Just depends on which engine you're talking about. Sure, the most powerful Mazda3 has 184 horsepower but the Elantra Sport still beats a lot of vehicles in its class. If you're going to knock it for something, berate the 154 lb. ft. of torque but make it a level playing field in your criticism.

Patrick Rall wrote on November 25, 2013 - 8:01pm Permalink
But if GM cuts crap like power windows and a stereo setup from a Camaro performance model...MT praises them. MT praises everything that GM does. When I visit the MT site, every ad slot on the front page is running an ad for a GM vehicle no matter how many times I refresh. Coincidence? I think not.
John Goreham wrote on November 27, 2013 - 2:38pm Permalink
Surprised MT didn't mention how the Hyundai compared to the $62,000 BMW 335i. Seems like that is their basic benchmark. For everything.