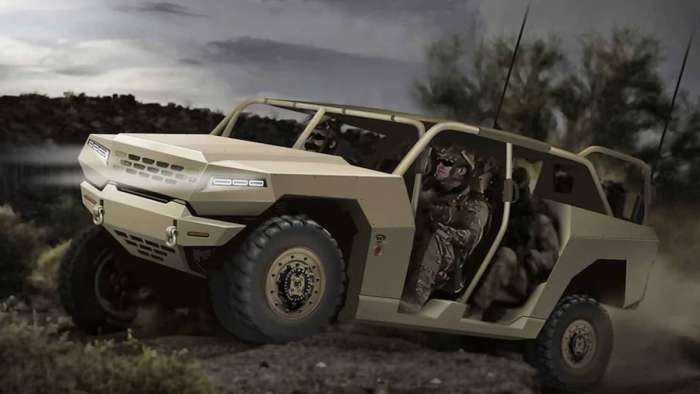 Way across the globe, Kia has introduced its military vehicles based on the Mohave platform. The Korean manufacturer needs to bring them stateside stat. If it does, it’s game over for the Tesla Cybertruck and the GMC Hummer
Advertisement

A lot of attention has been paid to the recently announced GMC Hummer and the Tesla Cybertruck but Kia has something a lot cooler to offer. It’s a new military vehicle based on the Kia Mohave platform.

Kia in South Korea plans to start manufacturing prototypes of mid-sized standard vehicles within this year and take the test evaluations by the Korean government in 2021. The company’s goal is military deployment from 2024, following standardization and initial production tests.

The large-scale program will see the replacement of 2.5-ton and 5-ton military standard vehicles currently in operation, and the development of new 5-ton bulletproof vehicles.

The standard vehicles will be equipped with a range of the latest commercial technologies, including high-torque 7.0-liter diesel engines and automatic transmission systems, ABS and Anti-Spin Regulator (ASR), Rear Parking Assist, Around View Monitor, satellite navigation and hot wire seats.

The military vehicles are being built on the Mohave platform. Here in the U.S., we used to know it as the Kia Borrego. But it went away after two years because Americans can’t have nice things. And, we apparently weren’t ready for a body-on-frame SUV from Kia. In fact, the last time we wrote about it was way back in 2012 when over 20,000 Borregos were recalled for brake issues. As we reported back then, The Borrego was Kia’s first attempt at a full-size SUV. In 2011, the redesigned Kia Sorento mid-size crossover SUV officially replaced the Borrego.

The developed ATV will not only be deployed for military purposes, but will also be used in various fields, such as industrial and leisure sectors, drawing on bare chassis from the Kia Mohave SUV. Kia will enhance its reputation as an SUV brand by applying technology and know-how from military vehicle development to improve the durability of its road-going SUVs.

And that’s where the GMC Hummer comes in. Kia has to bring this macho Mohave wannabee back to the U.S. in time to fight the GMC Hummer and Tesla’s Cybertruck. Let’s be frank. Kia ain’t known for being macho. Sure, the Kia Stinger is a beautiful car but it’s more tennis player than rugged linebacker.

Kia brings the military version of the Mohave back to the U.S. and it’s game over. The Mohave will be more rugged and have true military capabilities in its DNA.

What’s really interesting (at least to those of green geeks), Kia is exploring the potential for hydrogen fuel cell technology across diverse military applications, including fuel cell vehicles and emergency power generators. Fuel cell technology is considered suitable for future military vehicles as it can supply large amounts of electricity in combat environments, according to Kia. Not only could this Mohave military vehicle be painted green, it could make the backers of the Green Deal green with envy. If Kia builds it, say in West Point, Georgia, tree huggers and veterans will be lined up side-by-side to drive it.

Jack wrote on November 19, 2020 - 11:13pm Permalink
Hydrogen and diesel? How about no.
Don Rexer wrote on November 20, 2020 - 12:23am Permalink
The writer doesn’t seem to be aware that the cyber truck is an ***electric*** vehicle. That is the primary factor that makes it desirable. Kia is a good company, but diesels are out, all fossil fuels are out, the future is EV.