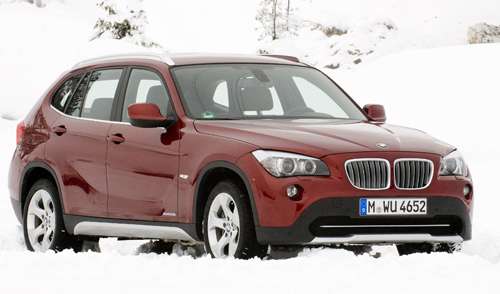 BMW Will Amaze with Host of Debuts at NY Auto Show

Just across the Hudson River from their U.S. headquarters, BMW will be busy at the New York International Auto Show with the debut of the New BMW M6 Convertible and BMW X1 Sport Activity Vehicle – in addition to a host of other debuts.
Advertisement

The BMW M6 Convertible and BMW X1 Sport Activity Vehicle will make their world debuts at the 2012 New York International Auto Show on Wednesday, April 4th at the BMW Stand from 10:15 a.m. – 10:40 a.m. at the Jacob K. Javits Convention Center in Manhattan. The BMW M6 Convertible and BMW X1 will be joined by the BMW M6 Coupe, BMW X6 M (North American debuts) and the BMW 6 Series Gran Coupe (U.S. auto show debut) as the featured BMW vehicles in New York. The BMW i3 and i8 Concepts will also be featured providing a glimpse into the future of mobility.

The BMW M6 convertible and coupe have taken the last couple of years off. BMW, while not releasing photos ahead of the NY show, said they will be "more athletic, more focused, more luxurious and more efficient than ever before." Both the coupe and the convertible, now in their third generation, get a 560 horsepower M TwinPower Turbo V-8 mated to a 7-speed M-DCT transmission capable of propelling either model from 0 to 60 mph in under 4.3 seconds.

The BMW X1 Sport Activity Vehicle comes to the U.S. for the first time. BMW says its rising horizontal lines give it a sporty, elegant profile, while the classic BMW kidney grille, distinctive headlights and L-shaped taillights are unmistakably BMW. The BMW X1 is also the latest BMW vehicle to offer the TwinPower Turbo 4-cylinder engine that delivers BMW performance with reduced fuel consumption. (It's available on the new 3 series.) The updated BMW X1 will be available in U.S. showrooms in summer 2012.

What's interesting about the X1 is that a less than a week ago speculation was rampant on the Internet, including TorqueNews.com, that the X1 was not coming to the United States. BMW seems to have fooled doubters with the upcoming announcement at the New York Auto Show.

The BMW 6 Series Gran Coupe is a new 4-door, 4+1 seat addition to the 6 Series line. Its U.S. debut came at the Amelia Island Concours held recently in Florida, which is why BMW is calling it the first U.S. auto show debut. In other words, this is the first opportunity for the 99 percent of us who don't go to high-end concours to actually see the 6 series Gran Coupe.

BMW claims it "successfully combines the stunning proportions, design and driving dynamics of the 6 Series Coupe with interior room and amenities for up to five passengers. Harmonious proportions, precise lines and sleekly contoured surfaces give the BMW 6 Series Gran Coupe the unique ability to satisfy the driver who wants a luxurious and sporty coupe yet needs a car capable of carrying four adults in comfort and luxury."