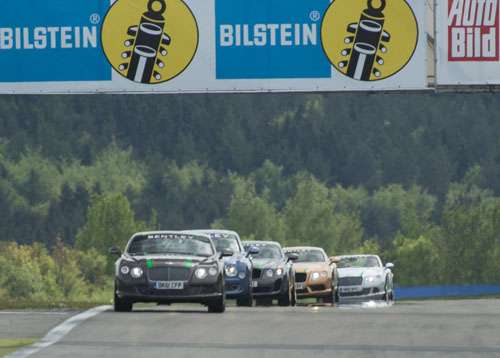 According to MotorReport.com, "Non-German marques didn't get a look in at any point during this fascinating race, which included carnage from multiple punctures in the early laps, as many as 17 GT3 cars running on the lead lap with nine hours already run – as well as a bizarre and dramatic conclusion to the battle for the final podium place."

The website added, “It was a great weekend, we had a perfect car and no problems,” said a delighted Markus Winkelhock, son of two-time N24 winner Joachim. “There are so many cars and drivers that could have won, which makes our victory even more satisfying. It means a lot for Audi, too. They've tried everything to win this race in the past and suffered a lot of bad luck, so we were under a lot of pressure this year. You need a lot of luck over 24 hours on the Nordschleife, and it was on our side this time.”

Winkelhock was joined in the winning car by his regular GT1 World Championship team-mate Marc Basseng, as well as Christopher Haase and veteran Audi test and development driver Frank Stippler.

The race kicked off in a luxurious way thanks to Audi's sister company. Modern-day Bentley Boys Juha Kankkunen, Guy Smith and Eric van de Poele joined Chairman and Chief Executive Wolfgang Dürheimer to lead all 170 competitors to the start of the legendary Nürburgring 24 Hour Race in a fleet of Bentley models.

The Bentley line-up, including the Continental GTC W12, Mulsanne, 630 bhp Continental Supersports and new Continental GT V8 form the official parade car fleet and are joined by a pair of Flying Spurs that provide a VIP shuttle service, in collaboration with the race organisers, throughout the gruelling 24-hour race.

Dürheimer said, “Bentley is proud to help support this year’s Nürburgring event, one of the most punishing endurance tests on the motorsport calendar. As a regular visitor to the Nürburgring during the development of our cars and with a personal passion for driving the track, I am delighted that Bentley is here in a race environment this weekend. I’d like to wish all the drivers the very best of luck for the long race ahead.”

According to Wikipedia, The 24 Hours Nürburgring is a touring car and GT endurance racing event on the Nordschleife (north loop) of the Nürburgring in central Germany. With a lap length of over 25 km (15.5 mi), it allows the participation of more than 200 cars, and over 700 drivers.

Officially called ADAC 24h Rennen Nürburgring in German, it was introduced in 1970 by the ADAC as a real race, unlike the earlier endurance contests that covered 12h, 24h (in 1961 and 1967), 36 hours, 84 hours and even 96 hours, like the Marathon de la Route. This substitute for the Liége-Rome-Liége and Liége-Sofia-Liège rallies was held on the Nürburgring from 1965 to 1971.