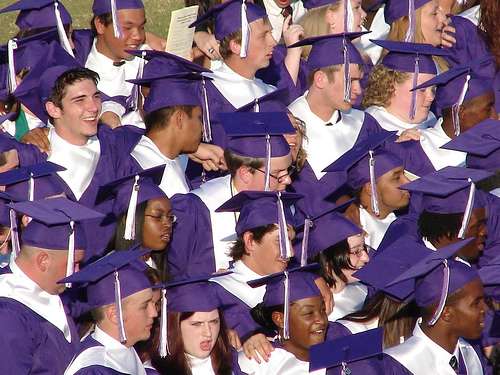 Americans feel high school dropouts should not get driver's licenses

More than two-thirds of Americans feel that high school dropouts should not be allowed to have driver's licenses until they get their high school diplomas. It's an interesting concept who many feel should be enacted to get more kids completing high school.
Advertisement

That's the findings of PSCars.com, a web site that provides consumers with a practical way to research, compare, configure, and coming soon, remain anonymous while receiving quotes online from dealerships nationwide, polled more than 4,000 drivers and found that roughly 68% of respondents agreed with creating a proposed "no driver's license for dropout law" in their state.

"Ultimately, the children's parents should have the final decision to revoke driving privileges from high school dropouts," stated Hernan Jaramillo, VP of Operations for Practical Systems Inc., which runs PSCars.com "If the high school dropout rate continues to increase we have to find a way to discourage students from dropping out. It's a step in the right direction to remove what most high school students crave the most, a driver's license."

According to a story from The Drudge Report, "A bipartisan bill moving through the Minnesota Legislature would bar young high school dropouts from getting driver's licenses. "Driving is not a right, it's a privilege," said bill sponsor Rep. Carlos Mariani (DFL-St. Paul). At least 20 other states tie driving privileges to school attendance."

"It's interesting that fewer women than men agree with this law because women, in general, are naturally concerned first about safety and security," stated Delia Passi, founder of WomenCertified.com, in a press release. "However, women may see this as impacting the ability of our kids to be a future breadwinner, which is still considered by women in a national survey as an important criterion for selecting a mate. To garner more support from women we should consider engaging parents in programs that tie school performance to their children's eligibility to earn a driver's license. Make it a family affair."

Top five cities that agree with this law:

Top five cities that disagree with this law:

Surveys of this sort always need to be taken with a grain of salt because they aren't random in nature with the questions answered only by people who went to PSCars.com.