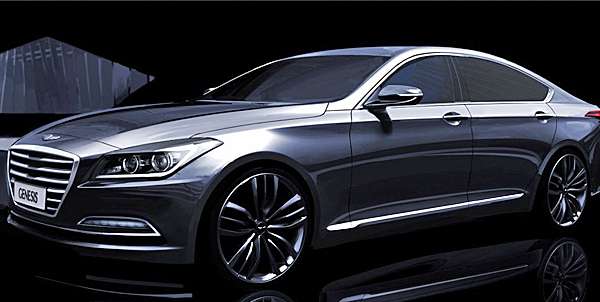 The South Korean unveil of the 2015 Hyundai Genesis shows it could be the best looking Hyundai ever to hit the U.S. market, but then again some might find it derivative based on spy shots unveiled and it could be termed a wannabee.
Advertisement

Is that damning the Hyundai Genesis to call it stunning yet suggestive? Not necessarily because it's going to be targeting a customer that is still largely buying on value and will be excited to see it look like a much more expensive car.

That expensive car in this case would be the Aston Martin. In this case, make that the 2013 Aston Martin Vanquish. Granted that car's a coupe – a helluva expensive coupe at $278,000 – and the Hyundai Genesis is a four-door rear-wheel drive sedan that's probably going to cost about $46,000 when introduced with all the bells and whistles.

So, in my opinion, what's driving the comparison? It would be the front fascia or grille as non-automotive types call it. Granted, from spy photos, it looks like it was inspired somewhat by the unlamented Subaru B9 Tribeca, but combine it with Hyundai's fluidic design 2.0 and you have a look that at first glance calls out Aston Martin.

Of course, while looking like an Aston Martin, it also somewhat resembles an upscale 2014 Ford Fusion. Again, that's not an unflattering comparison to make because the Fusion just happens to be the best looking Ford on the market right now – and even airport parking lot attendants confuse that model with an Aston Martin.

Hyundai, in announcing the upcoming Korean debut of the 2015 Genesis, hinted that it's looking elsewhere for inspiration for its premiere model. The Hyundai Equus is the flagship but the Genesis continues to be the model really defining the brand for the most buyers.

"Its main strengths are: Premium and distinctive design, best-in-class chassis system, premium European brands’ level of driving and [road and handling] performance, cutting-edge safety and convenience features," said Hyundai in the announcement. I added the bold to show the European influence.

The true defining design of the 2015 Hyundai Genesis, though, is going to be its interior and there are no good spy shots of that yet. Influential A-list automotive media was flown to Korea last month to preview and view that vehicle but they are under a strict embargo. In other words, no pictures are going to leak from them because it would mean cutting off that coveted insider status (and, frankly, if given the opportunity we would honor that embargo, too).

Hyundai is hinting at some major changes with something it terms, "Human Machine Interface" or HMI. Hyundai says it will let "drivers intuitively recognize vehicle functions, allowing for more convenient and effective use of those functions. Switches are categorized depending on their function, facilitating easier control. Symbols are standardized for intuitive recognition, and the feel of the grip and control have been improved as well."

Simple-to-use controls like those described above could easily make the 2015 Hyundai Genesis the best Hyundai ever period.

oknahs wrote on November 12, 2013 - 10:17am Permalink
Gorgeous. If the price point is accurate it would be priced in line with the Lincoln MKZ and under the Caddy CTS. We own a 2011 Kia Optima SX Turbo and everything you heard about this vehicle is true. Great design with quality materials at a affordable price. Fully optioned at $30850....today the 2014 Limited is $5k more. The low cost sports sedan is a fun car packing a 274 hp with a twin scroll turbo paddle shifters, cooled seats, nav back up camera a full panoramic sun roof and so much more. Quality is impressive but the buying experience from our local dealer was very unprofessional. Our next sports coupe will be the Hyundai Veloster Turbo. 208 hp paddle shifters in a light weight package that goes fast.

Elon Makes a Cybertruck Statement With an Action, But Quiet in Words
Tesla's Record Month in China: Doubled Registrations in March 2021
END_OF_DOCUMENT_TOKEN_TO_BE_REPLACED