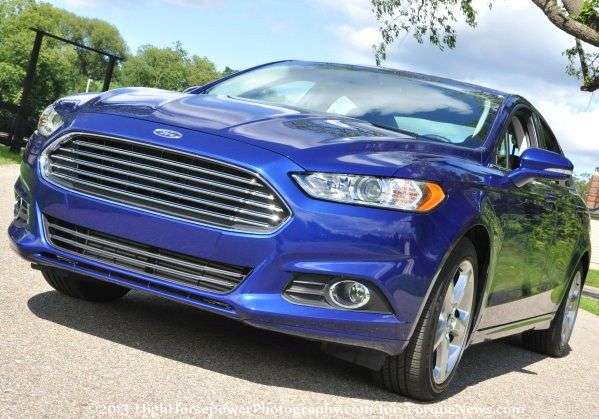 Ford Builds First Fusion in American Alongside the Mighty Mustang

Ford Motor Company (NYSE: F) announced today that for the first time ever, a Ford Fusion will be built in the United States - with the initial American-built Fusions rolling down the Flat Rock Assembly Plant as this piece goes live.
Advertisement

Ford announced earlier this year that the Flat Rock Assembly Plant where the Ford Mustang is built would begin providing production assistance for the popular Ford Fusion midsized sedan and after hiring 1,400 new workers and investing $555 million dollars into the former Mazda facility – today is the day that the first American-built Fusion sedans will be completed. Previous to these new units being built in Michigan alongside the mighty Mustang, all Fusions were built at Ford’s Hermosillo Assembly Plant in Mexico.

“With its bold design and great fuel economy, Fusion has exceeded all of our expectations, with demand outstripping supply,” said Joe Hinrichs, Ford president of The Americas. “Fusion in Flat Rock is a win for all of our stakeholders – including customers, employees and dealers. At the same time, Ford is continuing its massive investment in America by creating another 1,400 jobs.”

The 2013 Ford Fusion has proven to be incredibly popular, with sales up 13% already this year over the previous models but as sales have continued to grow, Ford Motor Company is faced with the inability to produce enough cars in Mexico to satisfy the demand. Fortunately for Ford, Mazda decided to move production of the new Mazda6 from the Flat Rock facility in Michigan where it had been built for years alongside the Ford Mustang back into Japan. This left Flat Rock with a whole lot of unused capacity and with the Mustang not keeping the workers busy enough, the future of the Michigan assembly plant was in question. Amidst those concerns came the news that Ford would use Flat Rock as an “overflow” production facility for the Fusion if Hermosillo was unable to keep up and with the massive success of the sleek new Fusion – Ford made the call to make the tooling changes and bring in 1,400 new workers to prepare for production of the midsized sedan.

“We are thrilled to have added production of Fusion at Flat Rock Assembly Plant – not just for our dedicated workforce here, but for the entire metro Detroit community and the associated jobs it will create,” said UAW Vice President Jimmy Settles. “Together with the domestic automakers and through the collective bargaining process, we are able to bring jobs to the U.S. that were previously located offshore. Fusion production in Flat Rock is a key part of that.”

In addition to increasing the production capabilities of the 2013 and 2014 Ford Fusion up into the range of 350,000 units per year and avoiding a possible sales constraint – and adding 1,400 new jobs in Michigan – the launch of Ford Fusion production in Michigan allows Ford to focus more on selling American-made vehicles. It is no secret that a great many consumers in the United States prefer to buy a car or truck that is made in America – even if it if made by a non-American company. Toyota has benefited a great deal with their top-selling Camry being made in the USA while the Ford Fusion (a vehicle in direct competition with the Camry and arguably Camry’s biggest threat) has always been a Mexican-made vehicle. The Fusion is still selling like hot cakes but in the push to be “more American”, the fact that just shy of a third of all Fusions built will be assembled in the US could help the Motor Company to continue to increase Fusion sales.

Ford Motor Company has been able to brag about offering America’s bestselling vehicle for over three decades now thanks to incredible popularity of the F Series pickups but it has been almost 20 years since any American vehicle appeared atop the list of the nation’s bestselling cars. The Ford Fusion is clearly the vehicle with the greatest chances of catching the Toyota Camry and today’s start of US production of the Fusion should help quite a bit from a variety of angles in Ford’s attempt to offer America’s bestselling truck and bestselling car.