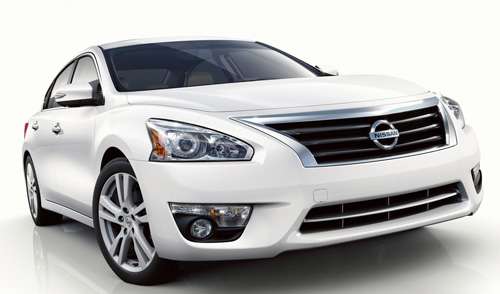 Changing the number two selling car in the U.S. is a huge gamble, but Nissan has pulled off a stunning success with the all-new 2013 Nissan Altima.
Advertisement

Simply put, the Japanese automaker has produced a midsize sedan that once again should come out on top. Before, frankly, the Altima was largely a value proposition. It was a quality sedan that was roomy in sedan. Plus, Nissan always seem poised to offer good deals on it. Around where I live in Central Connecticut, silver Nissan Altimas are ubiquitous. I call it the unofficial state sedan.

For 2013 that all changes. Nissan has created an aspirational sedan. It's going to be a car that people want to be in. It will not be seen as practical transportation with a roomy trunk. It's still all that but now it's a sedan that can engender passion among its owners.

I'm going to skip the passionate side of the 2013 Nissan Altima and focus on two practical elements of it that are perfect: 38 mpg on the highway and the zero-gravity seats. Let's look at the latter. Simply put, these are the most comfortable seats – bar none – that I have sat in for a long time.

Nissan, during a media introduction of the Altima in Nashville, Tenn., had us experience the seats as driver and passenger over the course of a couple hundred miles. Before we departed, the company had journalists sit in a 2011 Nissan Altima seat and a 2012 Hyundai Sonata seat. I never used to think those seats were horrible, but they are in comparison.

Seats are going to become the next battleground in the midsize sedan class because of what Nissan has accomplished with the NASA-inspired “zero-gravity” front seats that help relieve pressure points no matter what the body type. After all that driving, I felt no fatigue. Whenever I got out of the car, there was no need to stretch.

Here's the official explanation from Nissan about the seats: "Utilizing a new articulated seat shape with continuous support from the pelvis to the chest and distribution of localized deformation characteristics, the 'zero-gravity' Altima seats help reduce muscular and spinal loads, and improve blood flow – thereby helping reduce fatigue over long periods behind the wheel. Seat surface perforations provide increased ventilation, breathability and comfort.

Nissan needs to do what it did with the media at every dealership: a side-by-side seat comparison. You're not going to get the appeal of the seats on a short test drive. You're going to have to put some miles on the car.

Speaking of miles, the 2013 Nissan Altima gets the aforementioned 38 mpg on the highway from the 2.5-liter, inline four-cylinder engine. Its city mpg rating is 27 mpg – a figure easily beat during a road trip through Bell Buckle, Tenn., to the Jack Daniels distillery. (Don't worry – no alcohol was consumed during this test drive!).

I drove both the 3.5-liter V6 with 270 horsepower and 258 lb. ft. of torque and the 2.5-liter inline four with 182 horsepower – up from 175 horsepower – with a torque rating of 180 lb. ft. (same as the previous model). The 2.5-liter engine delivers all the power you'll need 99.9 percent of the time. Granted, it strains under hard acceleration but – and most auto reviewers tend to forget this – the average driver doesn't constantly drive under hard acceleration.

Nissan continues to make the best continuously variable transmission. For this next-generation design, 70 percent of the parts have been redesigned and internal friction reduced by up to 40 percent (versus the previous design). It also features new control logic and expanded gear ratio coverage, which helps reduce noise and fuel consumption while improving drivability and responsiveness.

The 2013 Nissan Altima also has available safety technology including blind spot warning, lane departure warning and moving object detection. The latter two are offered for the first time in the mid-class segment. The three systems are part of the optional Technology Package, which also includes the NissanConnect with Navigation with 7.0-inch color touch-screen and steering wheel navigation system controls.

The system doesn't use radar like other vehicles. The information comes from the Altima's rearview camera. It has an impressive self-cleaning feature that kicks in whenever it senses the view is obscured. Nissan specifically told me it will clear snow and ice so that it works during a slushy winter.

Another new aspect of the 2013 Nissan Altima that works extremely well is its active understeer control. It uses intelligent control logic and high-response brake actuators to brake the inside wheels for better handling. Hit a curve hard at an aggressive speed and the system takes you through almost effortlessly. (Of course I tried it.) Active understeer control works with the Altima's vehicle dynamic control and traction control and was undetectable when I tested it. There's no sense of an electronic nanny stepping in to take away all of your fun.

So what does all of this technology cost? Not as much as you would think because the Altima feels like a much-more expensive car. There's a base four-cylinder model starting at $21,500 but that's really probably heading to rental car fleets. Most consumers are going to want the 2.5S at $22,500, which has more technology on it, including cruise control, an intelligent key, enhanced audio, and power driver's seats. The 2.5SV costs $24,100 and comes with larger wheels, remote engine start, rearview monitor, dual-zone AC and NissanConnect, which has a host of technological features.

The 2013 Nissan Altima is going to change the game in the midsize sedan segment. It seemingly makes my former favorite, the 2012 Hyundai Sonata, look less appealing.

mgonzo2u wrote on May 28, 2012 - 10:25am Permalink
But it's a Nissan do this Americn would NEVER buy it.
Dan Brasoveanu wrote on October 24, 2016 - 1:22pm Permalink
Zero gravity seats might be OK for you if you have advanced scoliosis. But you if you have a bealthy back and want to keep it that way avoid them like the plague. My Nissan Maxima 2016 LS is cursed with such seats and no matter what I try (seat adjustments, pillows, covers) causes a lot of lower back pain