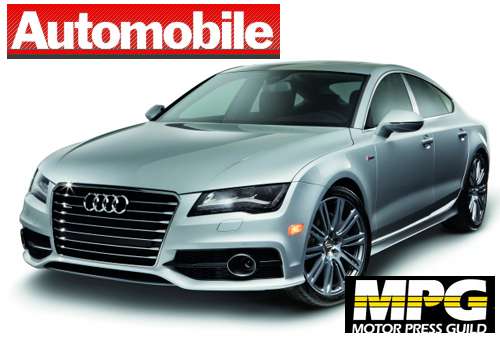 If early indicators are any clue, the 2012 Audi A7 is on track to be the North American Car of the Year with its latest designations as car of the year by Automobile Magazine and the Motor Press Guild, the largest automotive press association in the United States.
Advertisement

“It was a close contest, but the 2012 Audi A7 managed to edge out the competition with its compelling combination of handsome styling, dynamic handling and advanced in-car technology," said Laura Burstein, MPG President, in a release provided by Audi. "In this highly competitive market, it’s hard to be a standout, but Audi did it with the A7."'

Unlike other awards, the Motor Press Guild only awards a vehicle of the year. It did not differentiate between SUVs & trucks and cars like other associations do. The other finalists for the award were the 2012 Fiat 500, the 2012 Ford Focus, the 2011 Hyundai Elantra, and the 2012 Chevrolet Sonic.

As Automobile pointed out at is website in announcing the award, " … the Audi A7, does not represent a dramatic change of pace for its maker. Audi has been building handsome, fast, and rewarding luxury cars for some time now. Anchored by Audi's Quattro all-wheel drive, bristling with of-the-moment technologies, and surrounding its passengers with an artfully crafted interior, the A7 is exactly in keeping with the cars that this brand has been turning out. As editor-in-chief Jean Jennings said, "It's the culmination of everything Audi has promised."

Also, in October, it was announced that the Audi A7 had won the Active Lifestyle Car of the Year, an award that combines the opinions of professional automotive journalists and elite athletes. If there's one thing that goes together are Audis and elite athletes. New England Patriots QB Tom Brady has a fleet at his disposal (as do actors Robert Downey Jr. and Justin Timberlake).

Want to know what all the fuss is about? TorqueNews.com publisher Armen Hareyan penned a review of the 2011 Audi A7 that explains its appeal.

Armen Hareyan wrote on November 10, 2011 - 4:24pm Permalink
2012 Audi A7 is a very good car despite high price. It is worthy of being the North American Car of the Year. I had a very good impression when I test drove it last month.