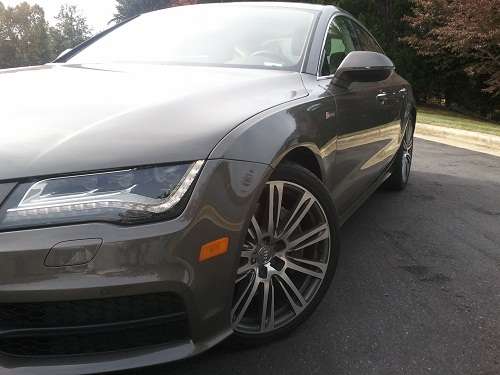 Some have called the 2012 Audi A7 3.0T a sedan, others have called it a coupe. Our review concludes that it’s just a great looking beautiful car with many goodies.
Advertisement

Considering that Audi already offers the popular mid-size A6 sedan and full sized A8 sedan, one may wonder about the purpose of 2012 A7. In the words of Audi’s North American CEO Johan de Nysschen the A7 fits as the emotional symptom between these two.

The 2012 Audi A7 has four doors and the back seat is well-sized, with plenty of leg room. Yet, because of its coupe-styled body, most people don’t notice the rear doors. The design is so deceptive that some people call it a coupe, others call it a sedan - Audi calls it a Sportback. Here is what causes the deception and the beauty. The long roof is like a movement from the front to the back, which meets the car’s boat tail at the rear. Shoulder line sinks far back. It begins at the front, takes its power from the engine and then sinks slightly to the rear. This combination creates a fresh-looking design, which has got the car a worldwide acclaim. The doors are frameless and the car has a very large cargo space, good for family events.

Last week Audi delivered the 2012 A7 3.0T to our Hickory headquarters in NC for a week-long review. Despite its luxurious price, we think it’s a great car not only for individuals, but also for family needs. We drove the new Audi A7 in Hickory, took a business trip to Charlotte (80 miles away) and took my wife and two children to the scenic Blue Ridge Parkway, driving in one of the most beautiful roads in the country. One has to actually drive the car to appreciate all that it has to offer, but we will try to discuss some particular essentials in this review in lay man’s terms. Essentials, that particularly stood out and attrackted our attention.

The narrow, but powerful headlights are one of the decisive characteristics of Audi 2012 A7’s exterior design. The designing team has greatly overhauled the front of the A7 including the compelling daytime running lights. It’s a very distinctive part of the car, which clearly defines the front and can even be recognized from far off in the dark. In U.S. and Canadian models the daytime running lights come on automatically when the ignition is on and the light switch is in the Auto position. The function can be turned on and off. There is one cool feature: the front lights are adjusted automatically so that the driver is less likely to see glare from his or her own headlights, for example when driving on a wet road.

Interior Experience of 2012 Audi A7

It’s not accidental that we use the term experience to describe how the driver and passengers feel inside the 2012 A7. Years ago, when other computer companies were running after more speed, Apple figured out that the users need better experience and not necessarily more speed. Thus, it brought forward new great products and succeeded. While some other reviews of 2012 Audi A7 have indicated the desire to see a richer interior design, we like the simplicity, sense of space and light inside this car. All the buttons and controls are at a reachable distance. The driver and the front-seat passenger can get a nice massage while seated. This can be done by adjusting lumbar support. Never, adjust the driver’s seat while the car is moving as this puts the driver out of position.

Audi A7 gets online by itself and the driver does not need his or her phone to get online. A little SIM slot, for a separate wireless account makes this possible, while there may be charges involved in this. This, itself, allows greater flexibility when it comes to navigation features, provided by Google Earth. One just has to see it. The navigation map is based on data packets received from the Internet in the form of satellite images. This is why, this service will work and provide live images only where there is mobile network coverage. But, this does not mean you will be without a Google-Earth powered navigation when there is no coverage. The data is stored on the MMI hard drive, which can temporarily store roughly the amount required for the navigation data from a 2,500 mile route. Standard map display is also available.

The navigation of 2012 Audi A7 is Wikimedia-powered and gives the driver and the passengers snapshots of local landmarks, along with the distance to the point of interest and a short description. Selecting your destination takes just one click, allowing you to pick from the great search function of the A7 sedan’s Navigation system complete with the 3G Google assistance. The search makes the usability of the navigation system even greater, a distinct feature that will make many drivers and travelers to love this luxury car. Use the Google search to find your destination and click to go there; it is just that simple.

We would only recommend that Audi makes the coffee cup holder space a bit larger. These days coffee cups have ceased to be standard and they have grown in size. While test-driving I bought a Dunkin Donuts small cup coffee and had to make an effort to fit it in the driver side cup holder.

In TorqueNews performance testing the 2012 Audi A7 accelerated impressively quickly for a large all-wheel-drive luxury car. The acceleration was 5.4 seconds from zero to 60 miles per hour speed on a flat testing ground. The fuel economy is pretty good as well. The city is 18 MPG, while the highway is 28mpg. Our combined experience was 22.5 mpg.

Audi has indeed made a great car. At a comparable price level only few cars can match the beauty, performance and the power of the 2012 Audi A7.

Amit @ Audi vs BMW wrote on October 14, 2011 - 12:49am Permalink
Audi is sloping down the gap between it's competitors by introducing new and advanced model of all its versions. The A7 is an amazing creation by Audi and is a real threat to many luxury cars.
Car guy wrote on October 14, 2011 - 12:39pm Permalink
I would say Audi is the new Mercedes-Benz. The 2012 A7 and A8 models put Audi in competition not only with BMW but also with Mercedes and other luxury brands. This is a great car.