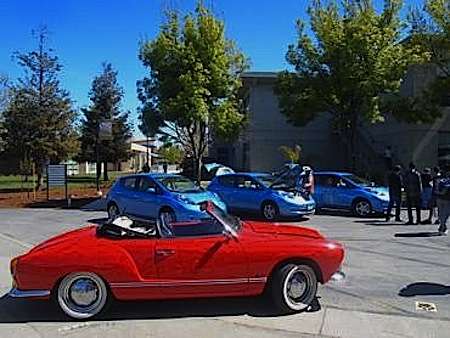 Rebates Should Also Be For Converted Electric Cars

While governments pride themselves on facilitating the purchase of electric cars, some are left out of the equation. What about those who convert cars to electricity?
Advertisement

If you’ve been reading our article, you’ll see a few of us are very much in love with the idea of converting older cars to electricity. In fact, they don’t need to be old, just light and convenient. It turns out some the 80s and 90s cars lent themselves perfectly to this sort of conversion.

Conversion Shops vs. Home Made
. The roads to converting an internal combustion engine car to electricity are wide and different. You could have a beat up old car lying around doing nothing, begging for an electric motor to continue offsetting its carbon footprint. Or you could be a desperate tweaker and a garage mad scientists, ever so eager to try on the latest electronic component. Conversion shops can help you transform that tire into a new electric vehicle. What ever flips your boat, electric car converters have different motivations.

However, one thing electric car converters don’t have is any recognition from their government. The federal government gives up to $7,500 of tax rebate of you make less than $100,000 a year when purchasing a new electric car. But what about when you take out a gasoline engine and replace it with an electric drivetrain? Zilch. Nothing, nada, and not even a word of thanks.

Petition Washington D.C. So with this in mind, a few electric vehicle conversion activists have decided to take matters into their own hands by letting Washington D.C. know that they not only exist, but represent a chunk of voters and deserve to be taken into consideration since they remove gasoline engines form our roads.

According to Equal Incentives for Conversions petition sent to the White House via Autoblog: “While the Federal government should continue providing Qualified Plug-in Electric Drive Motor Vehicles (IRC 30D) tax incentives for new plug-in vehicles, they should extend the same incentives to EV / plug-in conversions. Conversions target 250M existing vehicles on the roads, can save over 40% of fuel use or no fuel at all, have a smaller carbon footprint than new car since they reuse most of the original vehicle, and cost less to buy as an incremental expense making plug-in more affordable.”

Not A New Thing. Petitioning the White House to recognize the often not-so-well-seen silent majority is not a new thing. CalCars, the California non-profit organization has been calling for tax credits for years. But herein lies the problem, it doesn’t help the car industry and hinders the mass adoption number of electric cars, EV and plug-in hybrids, PHEV the administration would like to see. Since such cars have already manufactured, they will not longer pollute as much as building a new one. It seems only fair to give those who are converting cars to electricity a little break.

Tesla Contemplates A New Strategy for China Retail even As Sales Boom
Jay Leno on Elon Musk & EVs: “I Think He Should Get ... Credit"
END_OF_DOCUMENT_TOKEN_TO_BE_REPLACED