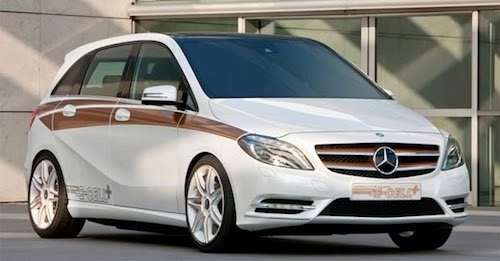 No one can say the Germans embraced the electric drive with passion, preferring to develop the internal combustion engine, ICE in a wait and see attitude. It seems after BMW dabbled with the electric drive, Mercedes is pragmatically bringing in the US a B-Class plug-in hybrid, PHEV.
Advertisement

Why is this Important? The German auto industry has been anything but enthusiastic about the electric drive, going as far as saying there was no future in it one year, and showing stunning prototypes the next. While we can always rely on them to offer quality products made with scalpel precision, it is interesting to see Mercedes finally stepping into the PHEV arena with no less then a five-seat compact hatchback.

Of course, we’ve had some mild hybrids from the company. BMW showed it could electrify a Mini, and finally offer an electric E-Active. Audi has had bouts of doubts, then publicly embraced the electric drive by revealing the stunning e-Tron three years ago, but little since. Mercedes has been busy tweaking smaller engines with greater horsepower while lowering consumption, as well as mild hybrids. So the relevance of a PHEV for the Teutonic carmaker is important.

Technically Speaking. Details for the US version are scant so far. The drive train layout hasn’t been revealed yet but the prototype showed last year at the Geneva Auto Show had a 134 hp electric motor, with a continuous output 94 hp coupled to a 67 hp 3 cylinder gasoline engine. It’s safe to assume the US version will have a bigger engine, more in line with GM’s own PHEV, the Volt and Fisker’s Karma, closer to a 2 liter, 4 cylinder engine. The Mercedes B-Class PHEV was shown with a lithium-ion battery pack providing 60 miles of electric range. It would be reasonable to see the same performance here. The gas engine should provide for another 300 or so miles of range before refueling.

The PHEV recharges the battery with its engine until 18 mph and at higher speeds drives the front wheels with the electric motor. In essence, we are talking about a series-PHEV at low speed that turns to parallel-PHEV when the pace picks up, as the Volt does. All of this is happening via a newly developed automatic transmission. Mercedes claimed the vehicle reach 0 to 60 in roughly 11 seconds with a top speed of 78 mph. The battery a joint venture of Daimler and Evonik and should be produced by Deutsche Accumotive. As far as the charging time, you can expect the usual, using a standard 110V power outlet or at a public charging station. Since the capacity of the pack isn’t known yet, we can assume based on the 60 mile range a roughly 15kWh pack which should take the same mount of time a Volt uses, roughly up to 10 hours on 110 and 4 to 5 on 220V.

This is big news coming from Mercedes for a few reasons. It didn’t choose to go the obvious route of using a sedan to introduce its PHEV. While sedans are more appealing to the general public, a “compact hatchback” is a better PHEV platform and will find better perception with a public wanting space and low gas consumption.

Mercedes doesn’t do things lightly. Introducing a PHEV is symbolic and takes a stab at the over-used “range anxiety” marketing stunt some companies disgracefully abused to peddle their products that were late to get to the market. Mercedes thinks carefully and moves even more pragmatically. In the end the products are always worth it. I would rather be in a Mercedes in an accident than most other cars. Now, Oh Lord, won’t you buy me a Mercedes Benz…