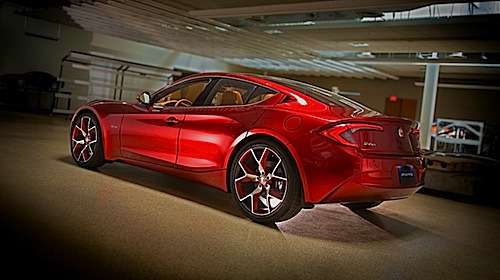 Jay Leno gets more info on the Fisker Automotive PHEV Atlantic from Henrik Fisker. A smaller and more affordable version of the Karma?
Advertisement

Henrik Fisker has designed some elegant cars ranging from the BMW Z8 to work with Aston Martins. We started seeing teaser glimpses of those smiling front fascia grills of what would become the Karma and Fisker’s dream to go from designer to manufacturer. With “eco-consciousness” in mind, the Karma hit the right notes, luxury and performance but it is not for everyone’s budget at $100,000. This plug-in hybrid, PHEV he calls an EV-ER, electric vehicle extended range heralds the next version, essentially a two-door plug-in hybrid aims at a more affordable segment called the Atlantic.

Karma Is A GT, Atlantic Is? If the Karma is a GT, a Grand Tourer, the Atlantic will be a smaller version of it. In my initial test drive of the Karma, I felt the ride experience was unique. The experience was one of a felt cushion inside a cocooned world. The car is heavy, but the interior atmosphere takes you along an exclusive world, one that takes away form the commonalities of everyday driving and delivers a plush, out of the world sensation. It’s fare to see the Atlantic trying to replicate this as much as possible.

Atlantic Hints. One thing Henrik Fisker admits to Jay Leno is that the next generation, the Atlantic will follow the route of the Model S, lower placed components, tighter integration, lower center of gravity. The idea is not new and one of the perks of designing an electric vehicle is that you can dramatically lower the center of gravity. Tesla Motors did a superb job with its Model S, integrating motor, differential and controller inside the rear axle thus lowering its center of gravity. The Atlantic will try to do the same with the suspected front-mounted engine called a generator driving a generator feeding electrons to the battery pack but not connected directly to the wheels, as with the Volt. Fisker makes a big point about this and explains this is why he calls it an EV-ER, instead of an EREV. Vanilla, off-white or light beige, you chose according to your taste and semantic logic.

Technically Speaking. While not much is known yet, Fisker says the Atlantic will continue using the same Karma plug-in series hybrid platform, allowing the driver to switch manually or automatically between electric and gasoline driving modes. The dimensions will be comparable to those of an Audi A5 and that’s it.

Here is the Jay Leno interview of Henrik Fisker.

Henrik Fisker is finding out building your own car is your designer’s dream but it is not an easy one. A few batteries caught on fire last year, topped with the bankruptcy of it battery manufacturer A123 Systems. Although the media had a field day and blew the news out of proportion, Fisker Automotives is still working on delivering a more affordable two-door PHEV, the Atlantic that should continue to innovate on the Karma technology.