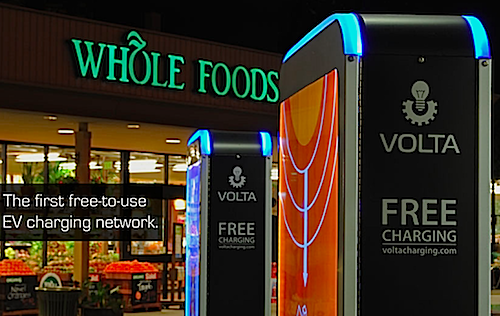 With a little help from investment firm, Hawaii Angels, Volta Industries plans to add twenty more charging stations on the Islands by the end of the year. Hawaii is a natural for electric cars with abundant natural renewal resources.
Advertisement

Volta Industries was founded by Scott Mercer and Christopher Ching in March 2010 and according to Scott Mercer, Hawaiians can expect to see twenty more free electric-car charging stations by the end of 2012. The company is continuing to develop the smartest charging strategy for electric vehicle, EV owners, a business model built around free electric-car charging stations. They chose the Aloha State as a starting point for their venture because of the ideal electric car conditions.

Who Pays For It? Since nothing is free, someone has to fork the bill over. In this case, Volta Industries has built its intelligent business model by appealing to sponsors. By strategically placing charging stations in high traffic areas, shopping centers, malls, and such, Volta Industries was able to find advertisers willing to sponsor each station. Think of it as the “Adopt A Highway” program but with electric charging stations. Electric car drivers on the island can charge their vehicles for free while shopping, thanks to the patronage of a few companies.

According to Chenoa Farnsworth, managing director of Hawaii Angels when speaking about Volta Industries’ business model: “They have proved the model. They have bootstrapped their way to this point and were able to gain some market traction ... For Angels that seemed to be a good fit where we could make a big influence.”

Hawaii, The Natural Energy Resource. Hawaii literally bathes in sunlight and has unending waves, perfect for hydroelectricity. The islands have so much renewable and sustaining energy at their disposal that it effectively became one of the top 10 electric vehicle ready cities in the nation. Since gasoline has traditionally been expensive due to importing it, renewable energies became the obvious choice for the state. In fact, Better Place has been eyeing Hawaii as an easy introduction onto US soil for some time now.

With 272 public charging stations spread out across the islands, Margaret Larson, program manager of the Hawaii Electric Vehicle Ready Program at the Department of Business, Economic Development and Tourism feels Hawaii is perfectly positioned to transition to electric cars. After all, the islands don’t have long road distances to cover, making them the perfect place for current electric cars. A coherent charging station network is what’s left to be built.

As of July 31, around 900 electric were cars registered in the state according to state energy data and we can expect more when the August numbers are released. Hawaii has been favored as the best place to introduce electric cars with its endless natural energy resources. Volta Industries is continuing the intelligent business model in Hawaii of free charging for customers, patronized by businesses in the best setting possible.