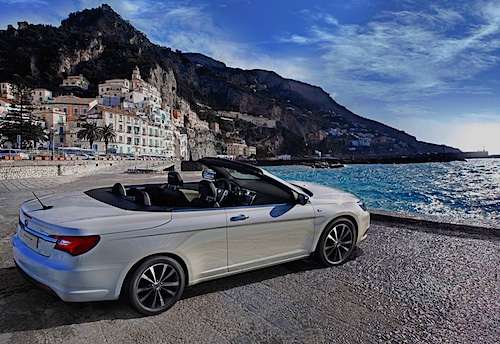 FIAT a few surprises for 82nd Geneva Motor Show, the FIAT 500 with Abarth colors and a tantalizing Lancia.
Advertisement

If you happen to be in Geneva, Switzerland the second week of March, don’t miss FIAT’s impressive collection of cars. Alfa Romeo, Lancia, FIAT and Abarth will be there to show the Italian manufacturer has in store for you. And who knows, with a little convincing could export to the US?

The One We’ve Been Waiting For, Alfa Romeo. After a year successful year, Alfa Romeo will show its two stars, the Giulietta and MiTo models. Both models show the company’s latest technical, cutting-edge design, and of course legendary road holding and driving pleasure. The Giulietta won many awards this past year, including the safest car in its segment in the 2011 assessment by EuroNCAP showing a 5-star rating with the highest ever value in its reference segment, 87 out of 100 points. The company also witnessed its greatest image and sales segment growth in 2011 with shares up by almost 20%. Alfa Romeo were chosen by a more mature and demanding clientele with a greater number of families with children, which extends the brand's offering to a greater customer base.

Compared to the competition, the Giulietta has proven to require the least amount of servicing within its first 3 years or 56,000 miles, wooing fleet owners and making it Italy's best-selling car. The European market jumped on the top versions with 90% choosing the "Distinctive" and "Exclusive" models, 16% chose the most powerful engine, the 1.4 MultiAir which puts out 170 hp, representing 15% of the sales.

The Other One We’ve Been Waiting For, Abarth. FIAT bought the Abarth label and thankfully didn’t leave it to gather dust in some discarded drawer. Dubbed: "A world of performance since 1949" the Abarth will be at the Geneva Motor Show showing the legendary company’s world of competition and racing with versions more oriented towards "Gran Turismo", GTs. The new Punto Scorpione is a Limited Edition dedicated to speed and performance, which we will most likely unfortunately never see in the US. Why can’t we have these fun Europeans intact over here?

A new concept dubbed the Abarth 595 based on the historic 595 model that Karl Abarth presented in 1963. It is as a variation on the Fiat 500 which sports the 160 hp engine as a standard. It will be offered in two options, Competizione and Turismo. The first will be geared to race lovers without compromise, and the second to those preferring comfort, elegance and sport. After the success of the Abarth 695 Tributo Ferrari, of which more than 1500 cars have been delivered, FIAT is introducing a brand-new Abarth 695 "Tributo Maserati" as a genuine GT convertible, special, limited and numbered series. Finally, the company is presenting the 2012 Abarth sporting program designed for trophy racing, making the cost of entering competitions affordable, as the true spirit of the Scorpion was known for. An international format 2012 edition called "Make it your race" will be open to those aged 18-40 giving them the chance to take to the track a genuine Trofeo Abarth 500 race.

The Forgotten One, Lancia. While Lancia has left our shores, it is well and alive in Europe. Lancia will show its Ypsilon model, its mid-sized segment Delta, and its bigger Thema. The small and large MPVs Musa and Voyager will be displayed as well as the alluring segment D convertibles dubbed the Flavia Cabrio, available in March in Europe. Basically, a Chrysler 200 European model, it sports the 175 hp 2.4 L engine with 6-speed automatic transmission with two models to choose form, a sophisticated Bright White body with two-tone black/white fine leather interior and another with Mineral Grey paint exterior and black leather interiors.

The Lancia Thema AWD is the surprise with its four-wheel drive and two versions, one with the Pentastar 239 hp 3.0L V6 MultiJet II engine and the other, a beefier 286 HP 3.6L V6 Pentastar engine combined with e-shift 8-speed automatic transmission. The latter is equipped with the brand-new AWD.

Which brings us to this question. When are we going to see these fine examples on our US roads FIAT? Come on, the FIAT 500 is a budding success, us Alfa Romeo drivers are in desperate need of upgrading our rides and those Lancias seem like worthy predecessors of the fledgling Chrysler brand. In the meantime, I guess I’ll start looking for airfare for Switzerland and savor a little of that Italian flair at the 82nd Geneva International Motor Show.

Tesla-Funded Research Reveals One of The Biggest Mysteries of EV Battery
Tesla Tesla Buyer Nets a Whopping $12,000 Discount After Asking for Reduction
END_OF_DOCUMENT_TOKEN_TO_BE_REPLACED