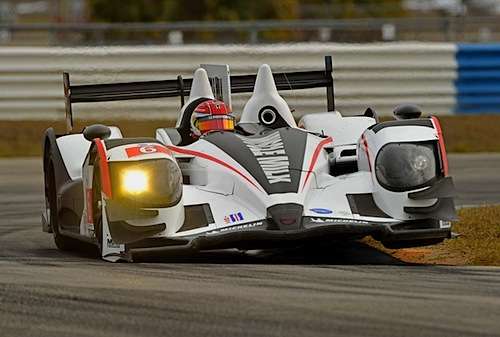 There are many venues where you can feel the thrill and exhilaration of a Grand Prix, GP but those that race on streets offer an extra touch and Long Beach, California is no exception while challenging Green Racing.
Advertisement

There is no reason for fans not to attend at least one GP in their lifetime. American Grand Prix in particular allows you to get up close to paddocks and chat with racing teams, something Formula 1 no longer offers.

The Appeal Of Sports Prototype. I love Sports Prototype for good reasons. The appeal of Formula 1 and Indy Cars is great, but they are still a too far away from the everyday driver. I bumped into Rubens Barrichello going into his KV Racing truck, but it was a fleeting moment. Nothing compares to the busy hum of an LMP or GT pit, busying fine tuning these ultra racers while the crowd of onlookers stare, transfixed. Sports Prototype and GTs offer is a glimpse of technologies that will soon in every day consumer cars.

Technically Speaking. The LMP1 have 475-575hp racers, weighing approximately 1,985 lb that can sprint 0 to 60 in about four seconds with top speeds of around 200 mph. The smaller and less powerful LMP2 are more purpose-built prototypes. They also have multiple manufacturers supply like the LMP1 in both open-top and coupe chassis, such as Lola, Honda Performance Development and Oak-Pescarolo. While the LMP2 flirt with similar horsepower to GT cars but only weigh about 1,984 lb.

LMP Challenge. This class uses the ORECA FLM09 prototype and weighs a minimum of 1,984 lb without driver and fuel. They produce 430 hp. Sporting full carbon fiber chassis, carbon brakes, and an Xtrac sequential gearbox with paddle shifting, they race on single-supply Michelin tires.

GT Class. These production-based, slightly modified and mostly rear drive race cars are the realm of Aston Martin Vantage, BMW M3 GT, Corvette C6.R, Ferrari F458 Italia, Lotus Evora and Porsche 911 GT3 RSR. They share many similarities to their production versions but reach speeds of up to 180 mph and produce between 450-500 hp with a minimum weight of 2,745 lb.

GT Challenge. The GT Challenge class features three specifications of Porsche’s 911 GT3 Cup car based on the road-going Porsche 911 GT3 RS. These GT3s reach top speeds of up to 150 mph with a minimum weight about 2,655 lb.

How ALMS Is Challenging Green. So how is the American Le Mans Series challenging the eco-consciousness of racing teams? With its Global Leader position in the Green Racing scene, ALMS is the only racing series recognized to comply with the Green Racing protocols developed by the U.S. Department of Energy, DOE, the U.S. Environmental Protection Agency, EPA and SAE International, SAE. Another thing is the 24hrs of Le Mans has challenged manufacturers to race as frugally as possible. This gave birth to fascinating little engine cars, from 750cc to 1.3 liters sipping fuel while achieving great performance as far back as the late 60s when “green” wasn’t in.

Today’s ALMS Race. Friday was unusual rainy and the ALMS qualifying was cancelled after the GT barely finished theirs. The Series decided on a points system for the grid starting position. The 1.968-mile Long Beach street circuit will have the Dyson Racing's Mazda-powered Lola coupe on pole position with Muscle Milk Pickett Racing's Honda Performance Development ARX-03a of Klaus Graf and Lucas Luhr in second position. Level 5 Motorsports' HPD ARX-03b will start first in the LMP2 series. Scott Tucker and Christophe Bouchut will team in the Sebring-winning Level 5 entry ahead of Black Swan Racing's Lola-Honda coupe of Tim Pappas and Jeroen Bleekemolen. Conquest Endurance's duo of Martin Plowman and David Heinemeier Hansson will start third in class with their Morgan-Nissan. CORE autosport's Alex Popow and Ryan Dalziel are on the Prototype Challenge pole. Popow, part of CORE's Sebring-winning trio, is racing at Long Beach for the first time.

All in all, these organizations see Green Racing as a way to foster and promote technology developments for tomorrow’s sustainability with production vehicles. As more and more teams become aware of its carbon footprint, they work harder on reducing their overall carbon emission. It won’t belong till we see more hybrids and the much anticipated electric racers. ALMS, DOE, EPA and SAE partnered to demonstrate how advanced automotive technologies and renewable fuels, not only meet the required racing performance but answers the endurance challenge. This technology trickles down to our everyday cars. The world-class competition the American Le Mans Series shows with its LMP and GT classes that Green Racing is not only real, but also ultra-competitive with technologies that effect our everyday cars.