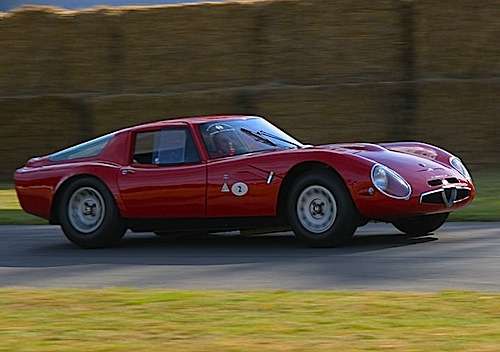 When we think of European racers in the 1960s, Autodelta and Chiti are probably two names that pop up regularly. Alfa Romeo is celebrating 50 years of Autodelta.
Advertisement

Autodelta... here is a name that should boil any 1960s race fan’s blood. The famous Italian group was none other than Alfa Romeo's competition department, which was established in 1961 first as Auto-Delta, then Autodelta SpA. The company was started by larger then life Carlo Chiti, a former Alfa Romeo and Ferrari engineer, and Ludovico Chizzola, an official Alfa Romeo dealer. It wasn’t until on March 5, 1963 that the team was officially incorporated as a department of Alfa Romeo. Originally based in Feletto Umberto, Udine, Italy the team moved closer to Alfa Romeo's facilities in Settimo Milanese in 1964 and officially becoming Autodelta SpA. This allowed Autodelta to use the Balocco test track for new racing cars and prototypes, which spawned many wonders.

50 Years of the Autodelta Team. Milano Autoclassica is a show for serious automobile buffs that gets you a closer look at the world of vintage cars. Held between 22-24 February at Fiera Milano, Italy, Alfa Romeo will take part in the event as testimony to its past automobile heritage. To mark the occasion, Alfa Romeo is celebrating the 50th anniversary of Autodelta at the 'Milano Autoclassica' event.

Autodelta was the official racing division behind Alfa Romeo's official return to competition after withdrawing from the F1 World Championship in 1951. Alfa Romeo won its second title with the 'Alfetta' then. It was crucial for Alfa Romeo to have a special racing organization physically detached from the production plant and having enough discretionary power to quickly take technical and sporting decisions. The most prominent figure of Autodelta's fascinating history is without a doubt the charismatic engineer Carlo Chiti.

Alfa Romeo TZ1 & 2, and 33 Stradale. Autodelta’s stamp on the racing world certainly could be boiled down to two cars, the TZ1 and 2 as well as the lineage of 33 Typo prototype car that eventually signed Alfa Romeo’s come back success all the way up to the 80s. The collaboration was fruitful and secured many international wins.

All in all, Autodelta was the success behind Alfa Romeo in the 1960s and onward to the culminating point of its international Formula 1 win in 1985. While Alfa Romeo has had a prestigious and internationally acclaimed past, celebrating its racing arm, Autodelta’s 50th Anniversary hopefully means FIAT is ready to let Alfa Romeo loose.